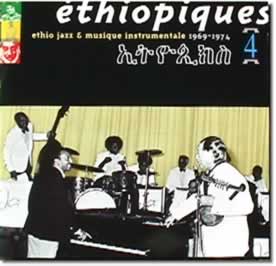 Volume 4 of this tremendous re-issue series on the French Buda Musique label (the most recent volumes being 10 and 11). On first glance this edition appears to be a various artists comp but in reality all of the material is extracted from the recordings of Mulata Astaqué, save one.

There are two compelling stories here: the remarkable music of Astaqué and also the inner story of the gentleman who independently released his recordings as well as others from the late 60's-mid 70's against the state decree that only the Phillips Corp could produce and release 45's and LPs. The booklet documents his situation well including the scene around Astaqué's music. Astaqué, a keyboard player, was heavily influenced by latin-jazz, and by fusing the percussive rhythms and structure from this sound with the lilting, modal melodies of east Africa in the form of sax and trumpet lines he created a sound that is both groovy and hypnotic.

The late 60's material has a more specific dance floor beat with many of the tracks using electric organ instead of piano. As Astaqué moved towards the mid-70's the material grows more funky and extemporaneous with a few tracks recalling a less extended late 60's electric Miles Davis.

What compels throughout the disc are the catchy hooks combined with an almost non-chalant execution. The absence of tension is refined by a subtle complexity and both Astaqué and lead sax man Fekade Made Meskel(a bit of a master in his own right and essential to the sound) are on top of the task at hand.

The cover photo shows Astaqué jamming with Duke Ellington (around '72) when Ellington was exploring African music heavily and no question Duke who knew who to check in with. Having heard several other volumes in this series, highlighting very different music than this disc, it is becoming evident to me at least, that this series is well worth in depth investigation.