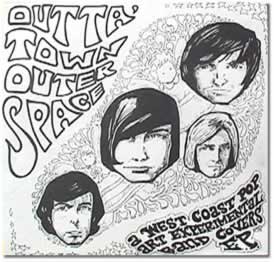 The big name on the 10' is The Clientele, though all the artists put in pretty fine cuts. My favorite track is 'Smell Of Incense', covered by The Smoke Rings. The song reminds me of The Salvation Army (the early 80's band who became The Three O'clock during LA's Paisley Underground period). It is the most 'rock' of the tracks on the 10', with chiming Rickenbacker guitars and a Mod back beat.

The 10' starts off with 'Will You Walk With Me In The Morning,' performed by Lucky Luke. It is a mellow track with violin, acoustic and electric guitar, tambourine, and female vocal. I'm never much for violin (except when Dambuilders or Pest 5000 played it!), but the song sounds pretty good to me.

The Smoke Rings are next. 'Smell Of Incense' reminds me of the 1980 London band Mood Six as well as Salvation Army, though there is more 'jamming' in the middle than either of those bands would ever have done.

Side 1 ends with The Transparent Fan performing 'I Won't Hurt You.' The melody of this tracks reminds me of another song I can't quite place. It is very tuneful and light, with male vocals, electric bass, acoustic guitar, and an electronic keyboard.

Side 2 starts with The Orange Alabaster Mushroom performing 'Until The Poorest People Have Money To Spend'. Listening to this track I can hear how The Three O'clock were influenced by The West Coast Pop Art Experimental Band. The vocalist of The Orange Alabaster Mushroom sings like Michael Quercio of The Three O'clock/Salvation Army. The song has a tune kind of similar to The Beach Boys track 'Sloop John B', a cut Michael Quercio sang on 'Rainy Day', the record made as a collaborative project between many Paisley Underground musicians.

The last cut on 'Outta' Town Outer Space' is 'High Coin', played by Southall Riot. I had really enjoyed the split single Southall Riot / George 7inch on Earworm, and I enjoy their track here as well. It is an instrumental with rich sounding acoustic and electric guitar, backed by a shuffling bass and drum. Plenty of reverb and tremolo, plenty of melody.

I have never heard The West Coast Pop Art Experimental Band. I never knew which record to buy, or if ANY of the records were worthwhile. This 10' has me interested in finally hearing them, plus I enjoyed the performances each of the bands gave. A good thing all around.