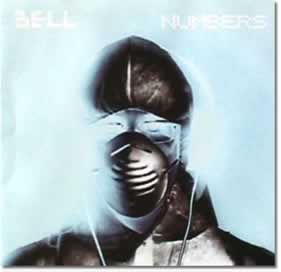 Bell are Dan Crouch and Adrian Stephens. Nope; I've never heard of them either. But what I HAVE heard is this great CD 'Numbers'. The sound is very similar to the Bpitch Control band Smash TV. This is music that the robots of Servotron (Man Or Astroman side project) would listen to while lounging in an oil bath. Like Smash TV, this music does not sound like humans making robot music, it sounds like robots making robot music.

Bell released this CD and a 12inch single to little notice last year. I believe that timing is everything, and that they were just a bit on the wrong side of the bell curve. If they put out a new record as good as this Bell will be known by a much larger circle of people than they are now.

The song 'Hotel November' blows me away each time I hear it. The International DeeJay Gigolo artist Vitalic 'Poney' EP used the same sound that I love on this track. It sounds like a WWII plane dive bombing, and Bell work it into the song well.

'New World Order' could BE a Servotron song. The robot voice (not a cheesy vocoder voice) sings 'we had to sterilize'. The robots would all be high fiving each other listening to this track. Us humans will recognize the sound lifted from Trio's 'Da Da Da' for 'New World Order'.

Remember how Baxendale introduced us to the sound of a Mac computer talking? The Bell song 'Computer' carries the idea throughout the song instead of just as an intro.

'King Monkey' uses the computer 'working' sample from the Mod Star Trek episode where Mr. Seven time travels from the future to detonate a missile within the atmosphere during a missile test. Terri Garr guest starred as his secretary in this 1968 episode.

I feel that this CD is a real discovery worthy of much wider recognition. I only brought up the Servotron connection because of the retro robot graphics they used and the anti-human sloganeering in Servotron songs. Bell is really for fans of music on labels such as Erstatz Audio, Bpitch Control, WMF, and International DeeJay Gigolo. Bell are peers with the best of the new.