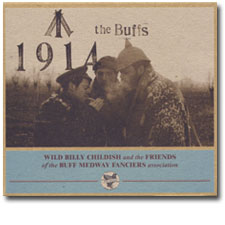 The Buff Medways third album which Billy proudly proclaims "there's no progression at all from the last record."

You Are All Phonies is again a poorly recorded song which has Billy calling a spade a spade by citing many examples of phonies. He ends up by saying that this song is phonie, so you can't accuse him of pointing out others peoples shortcomings to the exclusion of his own! I just don't like this one because it is shambling and kind of long.

I love the rest of the disc. There is a great instrumental Mons Quiff that reminds me of the only time Thee Headcoats played in Boston, when Billy Childish has a throat problem and didn't sing. Many fans were pissed at him because they figured that he was saving his damaged voice for the gig they had in NYC the next night. I was kind of pissed too, but really liked what they played nonetheless. Mons Quiff has a lot of energy and cool changes.

There is Barbara Wire, which has parts that sound almost exactly like the Sex Pistols song Liar mixed with Bodies.

There is the song Just 15, which was the a-side of a 7inch. I am glad that Billy doesn't stuff his records with songs we already know. I can deal with Just 15 being on the record, but I bet all his fans have it already on 7inch.

The really cool songs on this disc are the ones that sound like Sell Out era The Who. And that would be all the rest of the tracks. Buff Medways have background vocals that will really remind you of The Who in a good way.

Billy Childish is an amazing artist. Like Mark E. Smith with The Fall, he has kept producing music with 100% of the integrity of his early work, and has even surpassed his own high points time and time again. This album is a Billy Childish high point once again.