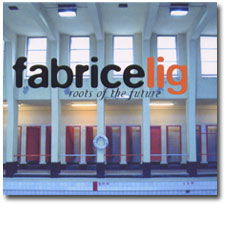 Fabrice Lig is best known for his work as Soul Designer (the Walking On A Little Cloud CD on F-Communications), but he has also put out a mad amount of 12 inch singles and very few cds, so it's a welcome addition to anyone's collection to hear the Roots of the Future cd compilation, which collects together a handful of his singles in one place. Fabrice Lig had been featured on the We Still Kill The Old Way compilation on Clone, but it's great to be able to hear him stretch out on a 70 plus minute cd.

Roots of the Future is chock full of what Fabrice Lig does best - hard hitting techno and electronic tracks which hark back to the sounds of Detroit while still remaining true to modern sensibilities.

The disc starts out strong with Escape from Nowhere which has propulsive synth bass and slapping rhythm tracks which come and go with glowing over arching synths over top. This is classic stuff as is the more laid back Galapagos, a laidback but tweaking masterpiece of understatement.

Thru Your Soul is one of the few forays into vocal electronic pop in a similar fashion to Luomo and Dub Taylor, I'd love to get my hands on a remix disc with this track in extended modes. There's a lot to imagine with Fabrice Lig's orgiastic synth chorus and vocalist Cleo's soulful treat of a multi-track vocals.

Nocturnal Melody in fact feels like a more laidback dub instrumental version of Thru Your Soul for people like me who wanted more. #6 is the only other track with anything resembling vocals, but these are lowkey vocodered vocals which aren't too intrusive to ruin this song for those who think that's passe, but is good for those longing for a few more vocal tracks to latch onto.

Pure Sound is actually one of my favorite tracks thanks to its Fabrice Lig trademark propulsive beats - but it's not as intense as Escape from Nowhere as it moves into Cluster-like keyboard solos.

For those who like the Detroit sound, Doux Reves is probably for you, a track which would've fit nicely on a Detroit compilation or an Aphex Twin album equally as well. It's got a loping beat and squiggling, jazzy keyboard synths which propel it into oblivion.

Most of this is old stuff, and this disc was really a spotlight for the vocal track and new single Thru Your Soul but this has just got me mighty curious to hear the My 4 Stars full length CD, Fabrice Lig's  latest album on Kanzleramt from 2004 (early versions of which have a bonus disc).

Related review in the gullbuy:

We Still Kill the Old Way