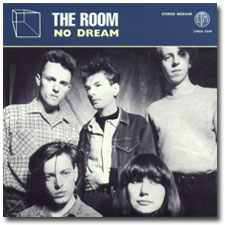 This is the first CD release ever from the Liverpool band THE ROOM. All of their releases were pressed via the band’s own ‘box’ label on cassette or on their friend’s label ‘red flame’. THE ROOM is a band that seems to have slipped through the cracks. Their new complilation, NO DREAM, exquisitely chronicles the transition from post-punk to indie-pop throughout its releases.

James Nice’s LTM label has almost exclusively re-issued former factory records’ bands, this release breaks that precedent. If it weren’t for LTM’s commitment to preserving good pop music, I would never have heard of THE ROOM. Listening to this CD, which is more of a ‘best of’, one can hear a band brimming with potential.

The first half of this disc comprises the early years. These songs have more of a spare, post-punk quality. In some ways they remind me of DISCO INFERNO or ST. CHRISTOPER, but both of these bands came on the scene roughly 10 years later. Perhaps THE ROOM was too far ahead of its time.

Relevant details provided by whisperinandhollerin.com: "The Room's history is made up of two well-defined eras. Both of the band's line-ups featured the nucleus of Jackson (vocals) and Stringer (bass), with the period 1980 - late 1982 also including guitarist Robyn Odlum and drummer Clive Thomas, while the later incarnation (broadly 1983 - mid 1985) included guitarist Paul Cavanagh, keyboards man Peter Baker and drummer Alan Wills, who - if yer know yer Scouse lore - also featured in crucial line-ups of The Wild Swans and Shack, and now runs The Coral's Deltasonic imprint."

Initial impressions of them recall at times fellow Liverpudlians’ Echo and the Bunnymen, but also Robert Forester of the Go-Betweens (esp. on Bated Breath), and also like Edwyn Collins of Orange Juice (esp. on A Shirt of Fire).

The Room's sound is very much that of early indie-pop; it is pre-C86 style pop at its finest. Use of a keyboard appears after One Hundred Years and becomes more prominent on the rest of the disc. This marks the point when the second line-up of the band took place. It comes to prominence on the near-sublime The Ride which hits you with the band's newer, more electronic sound.

NO DREAM is a perfect introduction to a band that desperately needed more exposure. It is a great release for anyone who loves British pop.