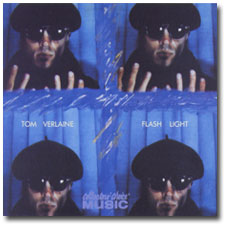 Flash Light was Tom Verlaine's third solo record after Television broke up. It originally came out in 1987 on Police drummer Stewart Copeland's label I.R.S. Records in the US and Fontana overseas.

The cover reminds me of the photobooth shots that feature so prominently in the story during the film Amélie. Like the ghostly man who appears in so many photos found ripped up under photobooths, Tom Verlaine is a mysterious figure that has stayed out of the limelight, yet dropped jewels on the public via the albums and singles he releases to little fanfare.

At the time this record was released my ears had turned to hardcore and thrash, but I still bought the record, as Television are possibly my all time favorite band. Flash Light is an understated record, with no obvious hits hidden between its sleeves.

A Town Called Walker was the 12inch single from the record. It has the sound of such Television songs as Ain 't that Nothin (from the second Television record Adventure). I am kind of pissed that Collector's Choice did not include the B-side tracks from that single, Caveman-Flashlight and Smoother Than Love on this disc. The disc clocks in at 39 minutes, so space was not an issue.

The song that makes this disc crucial for Tom Verlaine / Television fans is The Scientist Writes A Letter. Every time I hear the song strong emotions are brought up. The song is slow but not unhappy. It sounds like a reading to music of an actual letter. I think of the many letters by Gottfried Wilhelm Leibniz to Eliza transcribed in Neal Stephenson's Quicksilver (the first book in his Baroque Cycle trilogy).

The Scientist Writes A Letter is very romantic yet tragic, like the music of Tom Verlaine himself. While this record sometimes sounds fairly close to the music of Dire Straights, Tom Verlaine is a poet as surely as his namesake Paul Verlaine was back in the days of Rimbaud.

While this is not my favorite Tom Verlaine record, I would tell anyone who likes his music to buy it without thinking twice.

Tom Verlaine in the gullbuy: