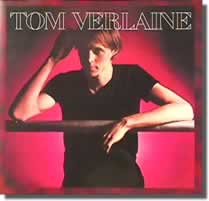 In 1976 I went to Patti Smith's Birthday show (her Birthday is New Year's Eve) at the Beacon Theater. The show featured opening acts Television and John Cale. I was 16.

That show left a real impression on me, even from my rafter seat. Television became a band I would see anytime I could. After two classic albums they broke up without any explanation (that I knew of).

I was too young to understand the idea 'if you love a band, break it up.' Paul Weller took that idea to heart a few years later as well when he killed The Jam. David Bowie broke up the Spiders From Mars from onstage at their very peak, to the surprise of his bandmates.

Retaining the purity of a band by destroying it before it could became a parody of itself is a noble act. I remember when my favorite Boston band Kudgel broke up at their height in 1995. At the time I was a DJ at Harvard's WHRB, when Morgan Andrews schooled me "Carl - if you're a musician and you love your band, you've got to break it up."

Tom Verlaine's self titled LP came out a year after he broke up Television. The record is incredible. Every song remains sacred to me. His lyrics make sense in ways few others ever did. Plus I have incredible memories of things which happened as I listened to this record. Collector's Choice have reissued the record with no bonus tracks (which is rare for them), but with brand new liner notes by Tom Verlaine. He was such a private person that it is really special to have his views on these songs which have meant so much to me.

Will you like this record? Well, if you liked Television - Yes. The record has the same exact feel as the two records by Television. It is not punk rock. In fact, you can hear Dark Star Jerry Garcia styled solos in Breakin' In My Heart. The record is like poetry set to music, just as Patti Smith did in her early work.

There are some notable guests on the songs. Jay Dee Daugherty (of The Mumps and The Patti Smith Group) plays drums on six tracks. Ricky Wilson of B-52s(with that oddly tuned 5 string guitar) plays on Breakin' In My Heart. Television bassist Fred Smith plays on every song. Allan Scwartzberg (of Peter Gabriel, James Brown, and Stan Getz) played drums on two songs.

The Grip Of Love starts off the record as a rocker. The guitar almost reminds me of Keith Richards with its angular riffing.

Souvenir From A Dream and Kingdom Come are the two songs with Allan Schwartzberg. These two songs are my favorites from an album of favorites. The lyrics, guitar, piano and melodies connect straight to my spinal cord with the intensity of a smell induced memory.

Souvenir From A Dream is a lament to a girlfriend heading carefree into life without seeing that she has already strode away from safety and her intended path. Kingdom Come is a statement of intent from an inmate breaking rocks in a prison yard, determined to achieve freedom and not look back on his past.

Mr. Bingo and Yonki Time are carefree songs that remind me of the Lower East Side in the early 80s. The lyrics of Mr. Bingo were "a parody/slag at a lawyer who had perfectly legally walked with a pile of yours-truly bucks."

Yonki Time is "a homage to all the zany novelty records of the 50's that I heard as a child." It reminds me of a stroll along Ave. B with all the crazy street folk calling out from crevices and corners.

Flash Lightning has all the intensity of a Television song from Marquee Moon. It is written in the classic mode of a Tom Verlaine rocker - that is to say, like no one else can (or has) written. So many elements, all intertwined to a package with the functional elegance of a Miele Vacuum.

Red Leaves has guitar that reminds me of Dire Straights. The background vocal by Deerfrance (no idea who she is) adds a lot to the feel of the song. It is a very pleasant song that was meant to be visual, describing the childhood "thrill of seeing thousands of red leaves blowing across a lawn for the first time...almost as if part of the world were peeling itself off to show you something even more beautiful."

Last Night was the first song recorded for the LP. The song has three guests who only play of this one track. Tom called in his friend Mark Abel to play 12 string, and mark called in his friend Tom Thompson to play drums. The session was completed with piano by Bruce Brody (who played with John Cale) and bass by Fred Smith. Last Night reminds me of the Television song Carried Away from 'Adventure.'

Tom Verlaine was an incredible force in music, and remains the consummate artist in my songbook. I love this record and strongly recommend it to you in the re-released form.

Tom Verlaine in the gullbuy: