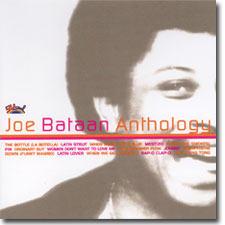 Joe Battan was born Bataan Nitollano to Afro-Filipino parents in East Harlem NYC. He is considered to be the King of Latin Rn'B.

In 1976 he co-founded Salsoul Records with Ken Cayre. The label was named after the record of the same name which Joe released in 1973. Salsoul combined the disco sound and the Latin sound and became hugely successful by using top session musians and great arrangements.

Johnny would be a great complement to Bob Marley's Johnny Was (covered by Stiff Little Fingers). Like the Marley song, Johnny tells the story of someone trying hard to succeed despite odds.

There are many Joe Bataan compilations available. This comp can be found (at the time of writing) for the ridiculously cheap price of $1.20 used on Amazon. Probably the BEST compilation of his stuff would be The Anthology 2xCD set on the UK label Suss'd, the holders of the Salsoul licence in the UK. Suss'd has put out over a dozen great Salsoul related comps, all containing 12inch mixes.

My favorite track on this record is Woman Don't Want To Love Me. which has a Roy Ayers-like disco-soul lovers vibe that sounds much better than I describe! It is a great song.

There are many great songs onthe disc. Sadie (She smokes) is his biggest song in my opinion. It is on many Salsoul compilations, and deserves any attention its multiple appearances can get it. Jocelyn Brown (of Inner Life) sings vocals on it. The lyrics give a tip to Donna summer and her Bad Girls song. "She smokes beep beep, she smokes toot toot." The 12inch mix of the song appears as a bonus on the CD as the last song.

The Koch Records compilation reviewed here was released on June 6, 2006. It has many great tracks, though it does not have his Chico And The Man (70s American TV show) theme song.

At the price you can buy this disc for, there is nothing for me to do but tell you to go online and buy it now!