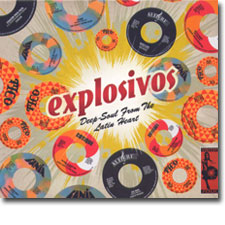 Vampi Soul has done it again with a superfine collection of late 60s Latin soul culled from the Tico, Fania, Cotique and Alegre labels all recorded between 1967 and 1970. There are hints of psychedelic moments, but for the most part this is all about the Latin rhythms. It's a real coup on the part of Vampi Soul that they dug through these Latin artists' albums to find the best of the Latin soul for this compilation. This compilation was also released as a box set of 7 inch singles, for the vinyl fanatics.

Oddly enough my favorite tracks come midway through this compilation. Bobby Valentin aka El Rey del Bass (King of the Bass) formed his own band in 1965 and was signed by the Fania label. His track Use It Before You Lose It is an absolute cooker of a killer track, and can be found also on his full length Let's Turn On/Arrebatarnos reissue.

Charlie Palmieri is the older brother of Eddie Palmieri (also heard on this compilation), and his track Fat Papa heard here is a sweet track from his album Hay Que Estar en Algo (Either You Have It or You Don't!) released in 1967 about dancing the shing-a-ling and sounds like it's a follow-up to a track called Fat Mama.

Quetcy Alma has a strange voice for Latin soul but that is exactly why I like her track Deep. This is a strange one, but it's somewhat understandable because Quetcy Alma was also an actress in a movie called Vacío en el alma in 1971.Quetcy Alma really lets loose on this one.

Flash & The Dynamics are still around today and have a Myspace page where you can hear Electric Latin Soul and 3 others. Electric Latin Soul is a fuzzed out gem with a psychedelic electric guitar workout combined with a driving soul rhythm instead of the usual piano base. This stuff is funky and dirty. Electric Latin Soul can also be found on their New York Sound album reissue. I bet these guys really smoke live, so if you're ever in Jacksonville, Florida be sure to check them out live.

Everyone has heard of Tito Puente, but luckily Vampi Soul has been able to dig out a really hot sounding track called Hit De Bongo from later in his career from the Pa'lante! (Straight!) album released in 1970 that has a bassline that just won't quit.