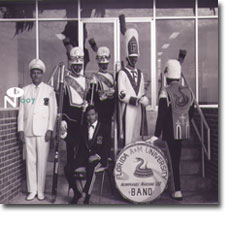 The Numero Group continues its Eccentric Soul series this time spotlighting the Deep City label from Miami and its related Reid and Lloyd labels. And while much of the Deep City output was derivative of the mid 60s soul sound of the day, there is also some gorgeous, heartbreaking original material to be found here, so once again the Numero Group is to be commended for digging up some truly obscure and interesting soul music from one of America's cities.

The Deep City label was run by two schoolteachers named Willie Clarke and Johnny Pearsall, and it was a starting point back in 1964-1968 for some major talent that later went onto bigger things, like Betty Wright (songs like Clean Up Woman and the Grammy winning Where Is the Love? in the 70s, but also Girls Can't Do What the Guys Do which was covered by Dusty Springfield on her See All Her Faces album), Henry Stone's T.K. label (home of KC and the Sunshine Band), Paul Kelly (who also recorded for the Dial, Happy Tiger and Warner Brothers labels), Willie Clarke (who went onto produce Betty Wright, Gwen and George McCrae, J.P. Robinson during his Alston years, and Timmy Thomas during his TK years - both Henry Stone labels), and Clarence "Blowfly" Reid (who released X-rated comedy as Blowfly, produced and wrote music for Betty Wright, and introduced junkanoo to Harry Wayne "K.C." Casey of KC and the Sunshine Band which was a major influence on their sound).

The label was also filled out with lesser known artists who were only known in the Miami area like Helene Smith, Them Two, The Moovers, Johnny K. Killens & The Dynamites, Freda Gray, Frank Williams, and The Rocketeers. And ultimately, it was a battle between the two main girl singers on the label, Betty Wright and Helene Smith which led to its demise.

While I did find a lot of the Deep City music to be derivative of other 60s soul music, (Johnny K. Killens & The Dynamites' I Don't Need Help has a Wilson Pickett sound; Freda Gray's Stay Away From My Johnny is a dead ringer for many a Motown girl singer's record; Paul Kelly's It's My Baby has a melody and musical elements right from My Girl), the best of the Deep City music has an astonishing depth and sound that kept me re-listening to my favorite tracks over and over again for the feeling they gave me.

That great Deep City sound kicks right in with the first track, the astonishing Am I A Good Man by Them Two. Starting with a soul blast that includes swooning background vocalists, a pulsing killer bassline, and the lyrics: "Am I a good man? Am I a fool? Am I weak? Or am I playing it cool?" Incredible, down-home, heartfelt soul at its best.

Helene Smith and Betty Wright battle it out for best female vocal and I think it comes up a draw. Helene Smith's I Am Controlled By Your Love is an oddity with a dreamy soul feel to it. Her Willing And Able has an older fashioned sound to it, but is so super sweet because it also has the added bonus of being a Christmas/New Years song.

Betty Wright's Paralyzed is about as good as it gets though. This is the kind of dreamy soul song that sneaks up on you. Just put this song on repeat and you'll see what I mean - beautiful and seriously soulful and funky.

Paul Kelly's The Upset starts out sounding like an evil sounding dirge, but turns into a song equating sports with love.

The funkiest groover comes later on the compilation in Good Thing Part 1 by Frank Williams & The Rocketeers. This is the one you want to play to get people really moving on the dancefloor.

There's also the added bonus of a scratchy acetate with The Moovers' harmony soul tune Darling I'll Go, which is fascinating for us acetate lovers, but might be too distorted sounding for most people.