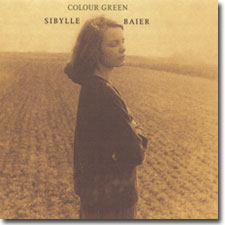 Every now and then you'll come across one of those albums, you'll remember the first time you heard it, where you were, how it made you feel. It was a plaintively plucked guitar followed by the words, "Tonight, when I came home from work" Only five seconds into Sibylle Baier's Colour Green you get that feeling that you've stumbled onto something very very special. imagine that must have been how J. Mascis felt, the man responsible for delivering this album to the guys from Elf Power who subsequently released it on their Orange Twin label.

Even though Colour Green was recorded in Germany in the early 70's, Robby Baier, Sibylle's son lives in the Berkshire's in Massachusetts and I would conjecture that's where the J. Mascis connection comes in. Devastatingly beautiful is a description I rarely use, if ever but I just can't help it, it's exactly that. It is so raw and so honest it hurts. It cuts through the speakers, nestles its way into your heart and stays there long after the album is over. With the exception of the last orchestrated track all of this is done with just voice and guitar.

Part of the intimacy of this record can no doubt be explained by the fact that these songs were never intended for release. They were recorded at home on a reel-to-reel recorder after a particularly dark period of Baier's life. The liner notes are brief but they note the catalyst for this change coming after a road trip across the Swiss Alps. Prior to this Baier had never written a song before. Her music has appeared Wim Wenders' 1973 Film "Alice in den Städten"(Alice in the Cities) and in the film "Umarmungen und andere Sachen" (Embraces), by Jochen Richter.

If I had never read the liner notes which date the recordings between 1970 and 1973 I would have assumed this was a brand new record. I was so astounded in fact that I still find it hard to believe. I've heard people begin to lump her into the same category as Vashti Bunyan which I don't completely understand. Yes, the albums are from about the same time. Yes, both rely primarily on vox and guitar, Yes they both have a sort of hushed and honest delivery. However, while there are elements of hope in Baier's lyrics, the sort of hippy idealism on the Bunyan record is absent. "Just another diamond day" has been replaced with lines like "I lost something in the hills."

The record's depths speak of a sort of a deep sorrow that seems to have more in common with contemporary artists like Julie Doiron and Kath Bloom's recordings with Loren Mazzacane Connors. I'm convinced that in a short matter of time there will be a lot more name dropping of this one.

If you are looking for any more info on the artist good luck, there is really not much out there to be had and in a way it only adds to the mystique. Supposedly Thurston Moore is contributing an article about Sibylle for an upcoming issue of Arthur magazine which hopefully might shed some more light on a fascinating artist. Until then enjoy the music.