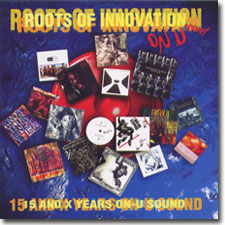 Adrian Sherwood's On-U Sound label has been releasing interesting music since 1980. Even though this comp is subtitled 15 and X Years, it should really be 25 and X Years, as this compilation came out in 1996.

In the liner notes, 2 Badcard describe their song in a fashion that could be applied to all music on the label: "a combination of old time classics and miles ahead future sound."

On-U Sound has released many compilations. Due to the staggering number of released on the label, their are amble pickings to choose from and all of the On-U Sound compilations I have heard have been strong all the way through.

The sounds usually involve vocal reggae or dub, but filtered through a post-punk sensability that adds dissonance along with echo and reverb. Sometimes other ingredients are introduced, such as disco, in the Strange Parcels track Disconnection. But it is never quite what you expect. Disconnection has as much banjo as mirrorball on it.

New Age Steppers was a project Ari Up sang in after The Slits broke up. Their cover of Junior Byles classic reggae track Fade Away is pretty darned classic itself.

Mark Stewart was recently the subject of a compilation on the label Soul Jazz. Welcome to Liberty City is a track from Mark Stewart & The Mafia which he recorded after leaving his no-wave / funk band The Pop Group.

Little Annie is Annie Anxiety of Crass and many other bands. Her Give It To Me sounds like the Gillian Anderson track Extremis from the compilation Future: A Journey Through the Electronic Underground. Annie speaks the song in a soft seductive voice.