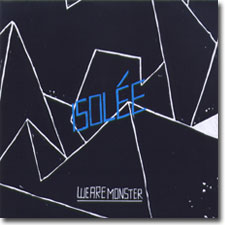 In 2000 Isolée (Rajko Müller) dropped the debut LP Rest on us. It was on a small label (Playhouse), but it made a big impact and gained a lot of respect.

In 2005 Isolée released the second record, We Are Monster. In the time between the two records, Playhouse has made quite a name for itself as a lable that released disco-ish electronic music, and We Are Monster was touted as Isolée's "disco" record.

The album opens with Pictureloved, which uses a faded in sound like Will Seargent used in his guitar part on the Echo & The Bunnymen song Broke My Neck (Long Version) from the B-side of the 1981 A Promise 12inch.

Schrapnell has a plucked reverb-soaked guitar kind of like the 1990 Angelo Badalamenti Twin Peaks Theme.

Enrico has tremolo on a wordless vocal, and is the first track with a heavy 4/4 "disco" beat. The sound is closer to experimental music than house music. It is a very interesting track - almost anyone could enjoy it.

My Hi-Matic has a percolating synth that places it in the same league as the Giorgio Moroder / Donna Summer classic I Feel Love.

Face B sounds a bit like the Vitalic track Rock 01. Both have a warped synth line designed to disorient.

Today has an indie rcok sound with a clean trebly guitar - almost like Vini Reilly of Durutti Column is playing on it. There is also a slight vocal saying 'galaxy'. The other song with vocals is Jelly Baby/Fish, which I don't like much. It reminds me the Jahcoozi track Fish from a 12inch on WMF Records, but also appearing on the compilation Moment.

While there are no moments approaching the heady sound on late 70s NYC underground disco, the record is a big move away from the electronica sound of Rest, and We Are Monster is filled with many interesting tracks.