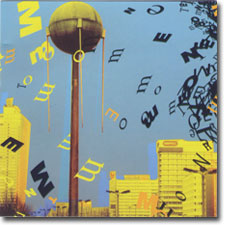 From the label that brought us a variety of exciting DJ mix cds like OceanClub, Native Lab and the Nighteffect series, WMF Records offers up an interesting snapshot from their vinyl catalog on their very first label spotlight compilation. All of these 12 inch singles featured were released between 1999 and 2003, and while these artists were also often featured on the WMF DJ mix discs, it's nice to hear them un-mixed as if they are fresh 12 inch singles spinning on the turntable.

Elektro Music Department starts things out with the mellow cityscape at dawn inspired Antonelli Electr. remix of Waitin' For the Mornin'. This track is taken from the Follow You To The End Of The World 12 inch single from 1999 but has never been compiled on cd. Synthy goodness warms up this track with a vocodered vocal sweetly tweaking a soft morning mantra.

Things get a bit more glitchy on Mitte Karaoke's Pandabär (the Ego Express remix). This remix was featured originally on the Pandabär 12 inch single from 2002 and while it is more glitchy than the Elektro Music Department track, it's got a dub overlay which makes it not so in your face. This track was also featured on the The State Of E:Motion Vol.10.

Bucci give us a rhythm buzz on the playful track Dude (the a-side to the Skip & Chord 12 inch single from the end of 2003), in what could be called electro-house fashion. I could see models walking on a catwalk to this tune, but only if they were in some other universe. The keyboards seem to be speaking a martian language as the rhythm marches on.

Jacek Sienkiewicz offers up his Theory taken from the Case Theory 12 inch single released on WMF in 2002. His theory is that minimal is best and the song Theory shows that to be true.

DJ Khanspiracy by Khan could perhaps give you your fill of vocal electro pop on this version of Kotai's Sucker DJ from the Sucker DJ (Remixes). This is definitely sleazy sounding but I think i like groups like Black Strobe better. I think I would have been more interested to hear the Jacek Sienkiewicz remix of Sucker DJ  from that same single. The original Kotai version can be found on City Rockers Present Futurism 2 and Sónar 2002 amongst others.

Jeremy P. Caulfield's Face The Flames is the pumping b-side from the Haunted Days EP originally released in 2003. This is definitely a track that would have made that 12 inch single worth your money as it pumps along quite nicely and is perfect for mixing.

Håkan Lidbo always has something interesting to offer and he offers up something similar to what was found on the Clockwise RMXS EP on The Helium Kid. This track feels like it is tick tocking along, almost speeding up and winding down as it goes and glitches into micro existence.

I'm always excited to hear anything by Nikakoi (aka Nika Machaidze) from the Republic of Georgia, whose music is one of the more beautiful entries one can hear in the minimal glitch arena. Nikakoi's Cekwa pounds and patters like rain with a glitched out rhythm and a plaintive keyboard melody quite perfectly. He's an artist that has been overly under prolific.

Jahcoozi ends the compilation with some female vocals by Sasha Perera which get glitched out and molded in a way similar to Dani Siciliano on their song Fish but which ends up sounding more along the lines of Pram or Suzanne Vega.

other WMF Recs compilations in the gullbuy: