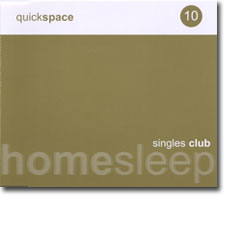 One of the strangest, if not shortest cd singles in rock history. The 10th release in the Homesleep Singles Club from the Italian label Homesleep by Quickspace clocks in at 4 minutes and 51 seconds with 2 songs (each around 2 and a half minutes long). The Homesleep Singles Club also featured releases by Yuppie Flu, Oranger, Sodastream, Meets Guitar (the side project of Gavin Baker from Billy Mahonie), Empire Of Sponge, Butterflies Of Love, Califone + Orso, and Fuck all released once a month in 2003. I guess some of these mail order only singles have finally straggled there way into stores.

Quickspace pretend that the last 10 years have not happen as they shamble through two hungover short twinges as if they didn't realize everyone had already gone home. In a Field of Nymphs is the rocking one with a catch up to the guitars beat and lyrics which go something like "Ahhhhhhhhhhhhhhhhh". Not Enough For You is the quiet one with the angst of a lost Pastels tune. Play it once. Play it again, Quickspace.