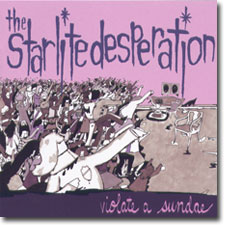 The Starlite Desperation's cleverly titled 6 song EP Violate a Sundae is their first new release since 1999's Go Kill Mice. They've set their amps to 11 and their engines are all revved up.

The Thing starts off with a memorably rhythmic and fuzzy bass and guitar refrain that will get your head bopping. Dante Adrian's vocals get an overdose of echo effects that nearly cancel out the creepy effect during the verses but he bites back hard when he gets to the cryptic chorus: But the thing is mine and the thing is slime and it wants to hold your hand.

The overuse of echo effects on Dante Adrian's vocals on It's Loud also takes away some of the raw power of that track. It has a different feel and pacing but the echoing vocals recall the previous track and there's not enough space on this ep for that.

Born to be Dizzy sounds like they've hit their stride. The title is as clever as the ep's. These are the angriest sha la la las I've ever heard. They build up impressive noisy crescendos from the (not so) quieter parts. This track also has the best pacing so far. They throw in some borrowed bits from the distant and not so distant past. I heard small bits of Green Day's Long View (not a bad thing) and a smattering of some of the guitar scrapings from Bauhaus' Bela Lugosi's Dead. Any band that manages to combine those elements in the same track is on to something.

Frustration, a Soft Cell cover, turns the notion of doing a cover on its head, much like Soft Cell did. When Soft Cell covered Hey Joe, it was all synthesizers and deadpan detachment. Here they take a synth pop chestnut and Starlite Desperationize it with bombastic vocals and lots of loud guitar.

Conga Line has enough drive to get you hopping up and
down. This is the fastest number on the ep and Dante's
singing is rapid fire and sounds best here. He stretches his voice over a unique and alliterative chorus: Cradle rattle and doll eyes that die on her. The band backs him up with energy to burn as the fuzzy guitar and bass buzz saw away.

Everlasting Crime, the closer features the EP title in the second line. They keep the fuzz guitar bass attack up, but the pacing is more like plodding than pogoing. They seem to go out with more of a whimper than a bang, but either way, it's good to have Starlite Desperation back.

Starlite Desperation in the gullbuy:

Lost Kids in the gullbuy: