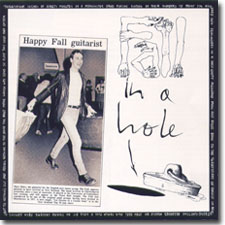 Yet another re-release of Fall material by Sanctuary Records. The numerously re-released album Fall In A Hole is now available yet again and with a bonus CD. Fall In A Hole is all live material from The Fall's 1982 tour down under. The tour took the band to Australia and New Zealand but the material here is all kiwi shows. The bonus CD is mostly unreleased material which is not from only the original release's Auckland show.

Touring Australia and New Zealand in 1982 was fairly novel for such a small band. The airfare wasn't cheap. It was a time before the rise of INXS, Crowded House, Crocodile Dundee, Foster's, and what the hell a Veg-a-Mite sandwhich was or it was Safe(ty) To Dance . The Fall was getting a little too much attention in England so they band decided to get out of Britain and head to Australia to work on touring with The Birthday Party's promoter's Ken West and Vivian Lees. West and Lees worked unde the name Edward Zimbilis and Syndicate. The Birthday Party were garnering some attention. So the team thought The Fall would be a good fit.

This is the original Fall line up of musicians; the brother's Hanley(Steve and the younger Paul), Riley, Scanlon, and Smith. This would also be the last times that this classic group would perform together again. Riley left the band shortly after the Australia/NZ tour end and tensions reached a boil. The departure of Riley makes this a legendary tour and archive of the Fall at their creative and artistic best.

The liner notes are once again provided by Daryl Easlea. This guy can write more about The Fall and not sound redundant while sounding like a real insider. You get the typical Castle releases clipping and graphics. You get the legendary story of Riley's departure shortly after the tour. A fight that started at a club the band was unwinding at after a set in their debut Australian show. The show did not go as planned. The drummer lost his replacement passport and missed the first few Aussie gigs. So no drummer. Smith showed up extremly late and was met with audience resistance. Smith did the entire show with his back to the audience. Tired and jetlagged the band repaired to a club to unwind. While at the club Smith saw his band mates on the dance floor, certainly not Fall-like, shakin' it to Rock the Casbah from The Clash. Smith proceeded to give each member a drubbing and Riley went after Smith and struck back. Although they promoted and played together. The tension never subsided.

The songs performed on this tour are mainly from the Hex Enduction period while some songs were to be put to vinyl much later, while others treat us to some of the earliest incarnations of songs yet to be performed. There is even a Deep Purple cover on the bonus CD, Black Night mixed with C'n'C. The CD 1 tracks are the preformance of August 21, 1982 at the Mainstreet Cabaret, Auckland, NZ. There are two later bonus tracks ending the disc from an earlier Mainstreet performance. Most bonus tracks are from two different shows; one in Chruchchrist and the other in Wellington at Victoria University.

If what you are hoping for is a crisp and clear recording of the infant Fall you will be disappointed. The recording quality is low budget 1980 technology. The sound is just a couple of notches above a high-end bootleg. It ain't live at Budokan but it is not a bootleg of some no-named band that flashed in the pan. The bands importance in rock's history, charisma and Smith's personality leap from the dated tapes and equipment. This era of The Fall was lo-fi so it all fits.

The intro to CD 1 is the song Impression of J. Temperance from the 1980 release, Grotesque (After The Gramme). A brief intro from Mark E. Smith and the bass delivers a dark and slow undertone. Solid Fall. The Man Whose Head Expanded is the second track. A true Fall classic from the 1983 Rough Trade single. The plucky and repeating guitar riff leaps out and the background is a bit muddled but still The Fall come through.

Hip Priest is the fourth track and sounds brilliant. I am grading on a curve of technological forgiveness but the lack of instrumentation in this seminal Fall track makes the recording sound better. It rarely approaches the over-mudulation that occurs in louder and moments with more instruments in the composition. Hard Life In Country is another track that is more simple and is recorded better due to simpler instrumentation. Another great track performed beautifully.

The sixth track, Prole Art Threat (from 1980's Slates release), suffers from the problem of over-modulation but you can still get the sense of the rousing and stellar performance of the classic early Fall track. This is a moment where you think that despite the lack of quality, you wish it was you there!

Classical is the eighth track which is well preformed but the vocals are too prominent. You get some lulls in full band delivery which adds to the sound quality. Once the song amps itself up to a full boil the sound quality limits the listening experience. Followed by Mere Pseud Mag Ed it also suffers from a sound that is too loud and dense to really experience the separation of all the instruments. The start is more clear but it gets muddy as you stream through the track.

Marquis Cha Cha is a less dense track that seems to have the levels off. With its swaggering and informal trademark delivery the song still has the tongue-in-cheek personality but is not the easiest listen compared to the 1982, Room to Live (Undiluteable Slang Truth) recording of the song. There is no doubt that the band is having a good time with it and who else delivers the kazoo with such sarcasm and aplomb?

When I got the CD and listened I was very encouraged on first listen. I then realized that I added the CDs incorrectly and was listening to the bonus encore CD 2, not the original main set on CD 1. The encore material starts with the song Fantastic Life from the Kamera 7" single release of 1981. The start is bright but too tin sounding. The mix is worked on as the tune moves along but it is now muddled and sludgy. English Scheme is the second track and it almost sounds like it is a true bootleg recording. The sound is far away and rivals a bootleg one hand held mic in the crowd.

Joker Hysterical Face is third on the encore track list. The performance and fantastic guitar sounds are well delivered yet held back by the recording. Despite this I think it is one of the better choices on the entire CD collection. But songs like No Xmas For John Quays is just too thick and lacks the detail to be fully enjoyed. Solicitor In The Studio also suffers from the same ailment and add to that the band seems to be losing their zeal.

The bonus tracks that are new this official re-release and incarnation of Fall In A Hole are also hints at brilliant moments. The first of the bonus tracks is The Container Drivers. The mix is bad and the sound is distant. The same goes for the second song, C'n'C-Black Night (Knight is the Deep Purple cover). The difference with C'n'C is the bad sound quality works to bubbling sludge. I may be more forgiving after hearing all the other badly recorded tracks. The cold as ice dead end makes it seem, in the end, like a silly and anecdotal add.

Who Makes the Nazi's? is one of my all time favorite songs by The Fall and it falls far from any version I have heard. A true bootleg quality recording it is merely proof that the band played this song back in the day. The last two tracks, Gramme Friday and Slags, Slates, etc., are recorded in a more bright and delineated fashion but there is a hiss in the taping and kills what is imaginably a great performance of both tunes. Mark E. is in his irreverent and scathing self. Out of the bonus tracks these last two radiate a little more energy than earlier bonuses.

There is close to 25 years of distance between this CD's release and the actual concerts in New Zealand. That distance may be a metaphor for these recordings. There is distance, not just in chronology but in the sound and mix. It is like you are outside the door listening in on these performances. You can't see the band and you are not actually there but get a muffled and distant chance to hear the The Fall in those early days. Much like Alan Lomax's recording and archiving the roots of American music for the Smithsonian these recordings are an archive of a distant past. Punk's past.

Even though these songs can be found on many albums and CD re-releases, the superior live studio recordings of the BBC Peel sessions, this is more archival then enjoyable for the general public. The Fall devotee, sycophant, enthusiast or collector will require this for their collection. Recently a friend was described to me as a "complete-ist". A "complete-ist" is a person who doesn't want the missing piece of a collection but needs it to complete the collection. That is the person that will want this CD. The person who is dabbling and looking to rediscover The Fall after 25 years would be better off enjoying the true recordings over these live representations. The struggle of the listening experience is best left to those that would want to be a fly on the wall of punk's history.