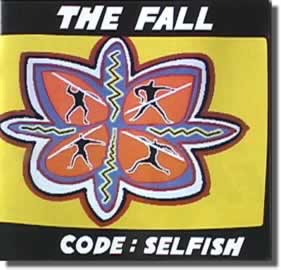 The thing I love about The Fall is that you could make a career of getting everything they ever made on CD, Vinyl and cassette.

You could spend your life combing the ends of the earth for every recording them. And when you were on your deathbed, convinced you had found everything, someone would tell you about another 250 CD's that came out that very day! And then suddenly you would find you'd actually missed the 4 releases they put out every time you dared rest! Fortunately, I never tried to be one of these people. I buy what I can afford and find, and don't lose myself to completist's disease.

I cannot really say or write anything new about The Fall. Others have said it better than I have already. All I can say is this: CODE SELFISH, from the Fall's period of flirtation with techno and rave culture, is a weak Fall record(The Infotainment Scam is also from this period and is far better). Methinks it was Mark's fun with E! that got him into this music, but it's not like drugs ever made bad records. No, it is not of their best records. It is no This Nation's Saving Grace or The Light User's Syndrome. But it has some gems on it. Overall, Mark does some decent singing on it, though he is no Robbie Williams.

'The Birmingham Business School' deserves its place in the annals of history as one of the best Fall songs ever. Though it's in the catalog during the Fall's dubious 'techno' period, it's loopy guitar part and Mark E's sneering vocals drip with the usual contempt for British upper class. The added techno-y elements of 909 drum beats and synths parts actually fit in quite well with the standard elements of the Fall's repetoire.

'Free Range' is Smith at his precogniscent best, predicting the conflict in Bosnia years before it occurred.

'Time enough at last' is a nice slower number by the band, showing us that sometimes Mark can actually sing in tune. Actually, huis singing is quite good on this record.

'Everything Hurtz' has alot of classic Fall elements to it: driving droning guitars, some nice melodies.

'Immortality' is a good one. Nice punchy bass, buzzy keyboards and some good guitar hooks. The rave element is lessened here, letting some good songwriting shine through.

'Two-Face' 's intro sounds like it wandered off an Orbital album, but eventually is moves into classic Fall territory. Smith ranting into what sounds like a telephone mic, bass thudding along with the drums while the guitars clang out somewhere in between. The keyboard line ending the song is a nice touch.

'Just Waiting' is the sound of, well... waiting for the song to be over. Not a memorable Fall tune.

'So-Called Dangerous' reprises some of the elements of 'The Birmingham Business School' (guitar, drums, drum machine), but sounds a bit more like some kind of imrov or sketch than a fully formed song.

'Gentlemen's Agreement' is a softer ballad-y piece, always scary territory for The Fall. But it's a good piece of melancholic atmosphere for the band. The use of drum machines in here is almost Tortoise-like, hardly the rave-y 909 sounds of other tracks. Midway through drums, guitar and bass begin a driving chorus part in nice contrast to the quieter beginning. The fade out is nice with Smith's voice over the remnants of the guitar parts.

'Married, 2 Kids' has a nice blues-y feel to it, with Smith taking on the persona of some blue-collar bloke (with a 'peculiar, goat-ish smell.'!).

'Crew Filth' begins with a nice techno buildup, which doesn't sound so out of place in this day of electroclash. It turns into the recording of Smith and others messing about on a Casio type personal keyboard, no doubt blasted out of their gourds, going on about their road crew. The kind of tape I made drunk in college when friends came over.

Now the CD Carl gave me to review has 2 cuts my copy doesn't. They are: 'Ed's Babe', a nice bit of driving big sounding Fall and 'Free Ranger', an alternate (and better) version 'Free Range.'

In all, there are some good tracks here. A necessity for The Fall fan, but someone wishing to get to know the band ought to begin with 'This Nation's Saving Grace' or 'The Light User's Syndrome.'