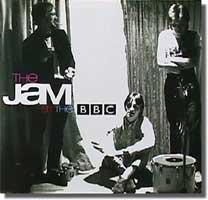 Jam compilations have sprouted up over the years out numbering the number of albums they put out during their existence but the labels that have put out these compilations are lucky - the Jam were prolific and inspired enough, growing at an exponential rate and they rarely had second rate material.

Being so prolific can make it hard for the compilers though - creating a hodge podge where a more thorough investigation could have yielded more enticing results. The Jam at the BBC culls from the Jam well of greatness while somehow coming across as somewhat of a hodge-podge. The problem lies in the fact that the two cd set (and the bonus live disc included in early pressings) combines four studio BBC sessions with three In Concert live broadcasts and for some reason they didn't include all of the studio sessions leaving off recordings from David Jensen's show in 1978, which included versions of News of the World, The Night and 'A' Bomb in Wardour Street.

This incompleteness ruins the chance of somebody having every note by the Jam and while there are live versions of 'News..' and ''A' Bomb....' it's still pretty annoying. Also annoying is the jumping from studio sessions to live concerts and back again. I think having all of the studio sessions on one disc would have made the impact all the more exciting and make the live concerts seem like added bonuses. Instead they chose to go in strictly chronological order with varying results.

Forgetting about the compilation aspect of the Jam at the BBC and focusing on the music is another story. Starting out disc one is a blur of early Jam songs including blistering versions of In The City, Art School, I've Changed My Address, The Modern World, Bricks and Mortar and Carnaby Street. These might sound even more vivid presented here thanks to the live in the studio recordings and spare but clear production.

The latter half of disc one is dedicated to an In Concert performance from 1978 and while the recording quality is somewhat dire the performances hint at the brilliance of the Jam in concert as they fire through scorching live versions of Billy Hunt (got to love the announcer's stutter on that song's name), In The Streets Today, The Combine, 'A' Bomb in Wardour Street, and The Modern World - the only complaint is the on stage feedback you can hear on some of the later numbers in this concert.

Disc two starts back in the studio for a 1979 session and a handful of the Jam songs showing just how much they have matured in just a couple of years with incredible versions of Thick As Thieves, Eton Rifles and When You're Young. There is also a live in the studio session which includes rougher sounding but inspiring versions of Absolute Beginners, Tales From the Riverbank, Funeral Pyre and an on the money cover of Sweet Soul Music (with fitting and fairly unintrusive interview segments included with the songs).

The latter half of the second disc is another In Concert from 1981 with a lot more rocking sound than the Jam were doing at the time - here they were definite superstars. My favorite tracks in this concert include Down in the Tube Station at Midnight (positively riveting), Ghosts (a wonderful version), and funky versions of Precious, Pretty Green, Start!, and Boy About Town (sounding completely different than the studio version). 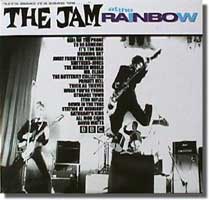 Disc three (a bonus disc included with some versions added in a thin slipcase) was added for obvious reasons: it's an often bootlegged kick ass performance In Concert at London's Rainbow Theater from 1979. After a warm-up version of Girl on the Phone (which is rough but kicking) the Jam run through pounding versions of To Be Someone, Burning Sky, Smithers-Jones, The Butterfly Collector, Private Hell, Thick As Thieves, When You're Young, Eton Rifles, and Down in the Tube Station at Midnight. Also of note is the version of The Modern World with the bleeped profanity!

I think this live disc is actually more powerful than the live stuff included with the proper two-disc version but thus is often the way with bootlegged concerts.

All in all the Jam at the BBC is a sprawling journey and while it could've included more and possibly could've been sequenced better it does come with the bonus live disc and it does include most of the studio BBC recordings which is a boon to any Jam fan. Finally a hole in the Jam discography has been filled.