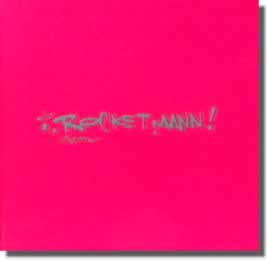 Rocketmann! was my introduction to Felix Stallings, Jr., better known as Felix da Housecat. Stallings is originally from Chicago, but he 'got [his] break in London in 1991' with Guerrilla Records.

Since that time he has created music under several names- Aphrohead, Sharkimax, Wonderboy, and the self-titled album 'Elektrikboy' that was one of the top 5 cds of Muzik magazine in 1999.

According to Carl (of the gullbuy) and the record label's website, PIAS Recordings, Rocketmann! was originally produced in 1995 as a 'concept record.' It is described as the 'soundtrack to the only blaxploitation space movie that should have been made.'

Just as you may expect from a sci-fi soundtrack the majority of the tracks are electronic instrumentals with unique rhythms infused with vocal samples. The last few selections have soulful vocals that keep the spacey soundtrack atmosphere.

A few of the cuts sound like demos to Felix's album 'Kittenz and Thee Glitz' where they were fleshed out with dancier beats and heavier grooves. 'Stars We Saved' sounds like an earlier version of 'Pray for a Star' on 'Kittenz' and 'Life Form' has similarities to 'Sequel2Sub.'

Rocketmann! has a more sober, serious tone when compared to Felix's later releases. At times the rhythms have a world-influenced feel like Brian Eno or downbeats similar to slower Autechre.

I can highly recommend Rocketmann! to gullbuy readers who would enjoy a soulful electro soundscape similar to a stripped down, simplified Orb. Those familiar with Felix the Housecat's work should be prepared to hear a different side of the artist.