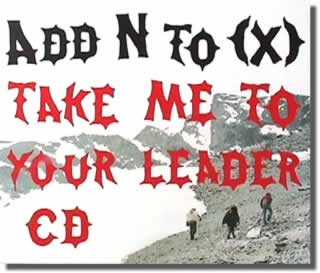 Take Me To Your Leader is the first single from the Add N To {X} album 'Loud Like Nature.' The song is electronic pop with a heavy dose of rock crossover.

On one of the 2 CD singles for The Poker Roll, the band had Jon Spencer do vocals. At the time I thought it was an odd pairing, buy now I can see it: Steve Claydon's vocals on Take Me To Your Leader sounds a lot like Spence himself, or even The Make Up.

The video starts with shots of Steve Claydon and Barry Smith (Barry 7) laying dead on cliffs by the sea (the White Cliffs of Dover?), worn out boot soles apparent. Then the film moves on to Steve Claydon, Barry Smith, and Ann Shenton traveling over the land dragging a white coffin. The film follows them through many terrains (up mountains, over ice, on dusty trails with great distance implied. There even in an underground segment with lighting from red flares. Eventually the three complete their journey with the coffin at the same cliffs they started. The film ends with shots of them laying dead on the rocks, played out boots apparent.

If I wanted to get real poetic I could say the film is an analogy for the band's career. They started off as nothing, have released many records and singles and toured ceaselessly all over the world, yet have achieved knowledge that all of it is worth little - they will end up where they started when the journey is done, dead to the public but grown as individuals.

'Take me to your leader, make me really happy, take me to your leader and make me really happy.' Are they talking to the record buyers and the press, asking us to make them huge? The question is fair, as Add N to {X} pre-dated the whole electroclash thing by several years. In fact, Take Me To Your Leader would fit in any electroclash set. The song itself has elements of Gary Glitter 'Rock and Roll' (the drums and beat) mixed with a little Gary Numan (the monosynth). The lyrics have the same yelp as Jon Spencer or Ian Svenonius.

The two non LP B-sides are quality instrumentals, not simply synthesizer freak outs as Add N To {X} have added to singles one or twice as bonus tracks in the past. 'The Trees Are Dreamless Leafless Genius (edit)' is a percussive number that once again recalls Gary Glitter. 'The Monkey Skirt Marters' has a feel like The Normal. It starts off with a synth melody kind of like Gary Numan's 'I Nearly Married A Human' then quickly amps up the intensity and becomes a driving track. Both of the bonus cuts are good driving music - music to drive cars, bicycles, or motorcycles fast to.