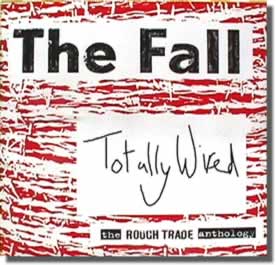 The Fall haven fallen prey to too many compilations, some of them not so worthy, while others end up being crucial listening, especially for those in America, who might have had a hard time getting the actual albums.

You can't really blame the eight or more labels The Fall have been on for trying to put out another compilation for a band that has been so prolific for so many years.

Luckily with this Rough Trade Records compilation it all gels together for a worthy 2 cd set of prime era Fall. The Fall recorded for Rough Trade at just the right time: the lineup had been firmed up with a relatively steady lineup, and Mark E. Smith was in his prime ranting best.

Two of my favorite Fall albums are covered in this time period including Grotesque (After the Gramme) (from 1980) on cd one and Perverted by Language (1983) on disc two. Sprinkled throughout these two albums are the crucial singles How I Wrote Elastic Man (and its B-side City Hobgoblins), Totally Wired ( and its B-side Putta Block), The Man Whose Head Expanded (and its B-side Ludd Gang), Kicker Conspiracy (and its B-side Wings), not to much such incredible songs as Pay Your Rates, New Face in Hell, Fit and Working Again and the Slates 10 inch.

The Fall also were always putting out pretty consistent live albums which were not just throwaway items (though admittedly might not have the greatest sound) and included here are live versions of songs like Hip Priest, The NWRA and Lie Dream of a Casino Soul.

Generally speaking the music from 1980 or so is shorter 3 to 4 minute songs with more emphasis on mayhem filled guitars while the later stuff from around 1983 is more dense with keyboards, repetitive beats and longer songs. This was a time period of incredible growth for the Fall and thanks to their association with the independently-thinking Rough Trade (who probably really didn't know what to do with these madmen from the north) they were able to release some of their most crucial music in this time period.

The Fall kept going and even had something close to popularity in various stints on larger labels, but they were never quite as exciting as the years covered on this 2-cd set.