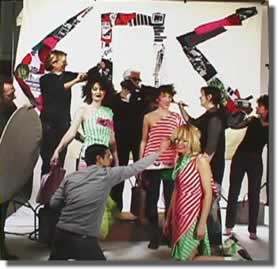 Fashion Rules! is the first new music from Chicks On Speed in a very long while, not counting their collaboration with Kreidler. Fashion Rules! is both a celebration and indictment of the fashion industry.

The song starts and ends with a sample from Daft Punk's mega-hit 'One More Time.' The cover of the 12inch is a Chicks On Speed fashion shoot captured by Karl Lagerfeld. Tobi Neumann and Thies Mynther produced the track.

A lot has happened since Chicks On Speed released The Un-releases and Will Save Us All. The electro explosion that has come to be termed electroclash is the biggest event, as Chicks On Speed almost defined the sound without being part of the hoopla that resulted from it.

Fashion Rules! is a good song that does not disappoint me. The flip side is a remix of the track by Alter Ego. The remix keeps the 'fashion rules' line of the vocal, but otherwise changes the song. It is not a throwaway track at all, though I do prefer the original version.

The Alter Ego mix has that by-the-numbers electroclash synth sound that Felix Da Housecat and Tiga have applied to many tracks at this point. I guess I'm thinking mostly of the mix Felix gave to the Dot Allison song Substance. Though I id not favor that mix when I listened to the 12inch, I enjoyed hearing it on the radio. The Alter Ego remix would likewise sound great taken alone. Its just that I really like the verse vocals in the original mix, and they are completely gone on the alter Ego mix.

I am looking forward to a new Chicks On Speed LP. I believe that Chicks On Speed have found a lot of strength through all the shows they have done, and are truly a band now, not just an art or fashion project with musical friends in high places.