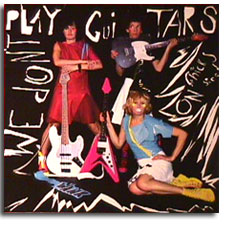 Chicks On Speed did something very fine for this single - they made the CD and vinyl versions completely different, with no overlaps.

The CD version of the single has the album version and remixes by Christopher Just, Captain Comatose and Cristian Vogel. I listened to the CD single and thought that the mixes sounded very interesting. they left the vocals in and played with the music, accenting different parts and adding their own touches.

The vinyl version takes another tact. The A-side is almost completely instrumental, and the B-side . There is an 11:04 mix by Chicken Lips and an 7:25 mix by Tiefschwarz. I really like what each have done!

Chicken Lips are currently my favorite band (along with Headman, and the DJ teams Soulwax and Glimmer Twins). Chicken Lips are from Stoke in England. They are Andy Meecham and Dean Meredith, joined by Steve 'Fella' Kotey for live shows. They play instrumental disco grooves similar to the sound that Tim 'Love' Lee exercises on his Tummy Touch label.

For this 12inch Chicken Lips contributed the 'Chicken Lips Play Dub Version' of We Don't Play Guitars. It is a jewel, filled with fat bass licks and deep grooves.

Tiefschwarz are Ali Schwarz, Basti Schwarz and Peter Hoff. They have an extensive discography of 12inches and remixes. Based in Germany, their work has crossed all borders. they even do one of the remixes on The Rapture Sister Saviour single.

For this 12inch Tiefschwarz contributed the 'Tiefschwarz Black Box Mix' of We Don't Play Guitars. They include a bit of the vocals, sometimes with echo or vocoder, but the main augmentation they add is up and down variation as they transition between sections of the song as if their mix is a DJ mix of several songs put together.

I hope Chicks On Speed play in the US again soon. We Don't Play Guitars is a very visual song that works best in a live setting. As for home listening, I will put on the Chicken Lips mix anytime, and give a congratulations to Melissa Logan, Alex Murray-Leslie and Kiki Moore - Chicks On Speed - for doing this single right.