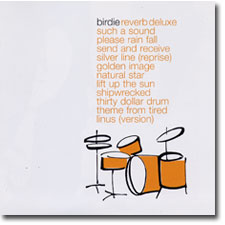 'Reverb Deluxe,' a collection of singles and B sides from 2000, is a good look at Birdie’s post 'Some Dusty' (their first album) releases. It’s a fine introduction to Birdie, because you can hear how they have evolved, especially in their love of 60s Hammond organ and 70s Wurlitzer organ sounds. Few singers can carry the torch for breezy flower power pop from a few decades ago better than Debsey Wylkes.

Such a Sound, from 'Triple Echo,' their second album, is a good calling card for them. It highlights their strengths, low key almost orchestral pop. The flute, horns and blinging piano blend with gently strummed acoustic guitar. The rhythm section quietly reminds you that it’s present, in that lazy summer canoe ride way. A warm, summery effect pervades this disc.

Please Rain Fall (previously unreleased) is a Sea Urchins (Sarah records) cover from 2001. The instrumentation is sparse, and rightly so, mostly organ and tambourine. Debsey’s smooth vocals are a contrast to the wonderful and slightly nasal pleading of the original. The passion is conveyed instead by the occasional timpani like rumbles that punctuate the verses.

Send and Receive from the Sidewalk single is a cool almost psychadelic instrumental with some wobbly off speed (?) Wurlitzer and wah wah guitar. Her higher pitched ahhs are barely there above the mix, and sound more like an exotic instrument. The rhythm section here almost rocks. They should be let off the leash a little more to see what else they can come up with.

Silver Line (reprise) sounds like part of a 70s Italian film score with the reel to reel tape either worn out or not quite at the right speed.

Golden Image came out on Track and Field’s Pow! to the People compilation from 2003. It gradually builds from a quiet intro with egg shaker, horns. Gently strummed acoustic guitar and quiet steady drumming come in, as Debsey’s ahhs gently float over it all.

Natural Star, also from the 'Sidewalk' single, features breathy harmonies and Wurlitzer. The rhythm section is again almost let off the leash. It’s the best feature of a track where the Wurlitzer is more like a time machine set over 30 years back, only to return to the present thanks to Debsey’s smooth crooning and airy ooohs.

Lift Up the Sun, the last track from the 'Sidewalk' single brings them back. It has some interesting 60s elements. The sad strings and flute blend with Debsey’s soaring vocals. Sometimes the strings have that off speed sound on the reel to reel effect, but this time it becomes a sun drenched confection.

Shipwrecked from the 'Such a Sound' single is another winner. The Wurlitzer stays in the background to let the acoustic and wah wah guitars emerge as Debsey’s warm harmonies bring a smile to your face. It’s about thirty seconds shy of being a perfect pop song, but it’s better to be left wanting a little more.

Thirty Dollar Drum, another fine instrumental, has some cool wah wah and wobbly guitar sounds with a neat harmonica effect and the rhythm section shuffles along nicely as Debsey’s sunny ahhs bring it all home.

Theme from Tired from the 'Such a Sound' single has a beat that will get you going like a bobble head. It’s Wurlitzer and Hammond laden, with some wah wah and almost rock guitar sounds to balance it all out.

Linus (version) also from the 'Such a Sound' single is a quieter version than the 'Some Dusty' version with more organ flourishes. I’m not sure why they revisited a previously captured moment, only to take away its better elements. I miss the crescendo of the original version and I’m not sure why they ended with more of a whimper than a bang or at least an exclamation mark.