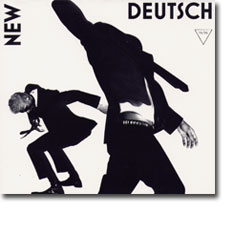 Like last years cd compilations Teutonik Disaster Volumes 1 & 2 on Gomma Records, Gigolo's New Deutsch digs into the vaults of Germany in the late 70s and early 80s, and comes up with a goldmine. Where Gomma centered their attention on funk new wave, Gigolo is looking more towards the electronic pop. I think Gigolo's release is way more consistent, and comes up with a much more classic sound than the Gomma compilations, which were great but often sounded dated (and the 2nd volume was much too short for the cd age).

When I first looked at this compilation, it seemed I knew very few of the band names, which is part of the point. Groups like Grauzone, Der Plan, Pyrolator, DAF, No More, Fehlfarben, and Echo West are astounding finds - some I'd heard (or heard of) before, but a lot is unknown to me. This music here would be lost to the history of Western music (which is UK and US-centric), if it were not for Thomas Bar and DJ Hell from Gigolo (who compiled it). New Deutsch is a step away from the shadows for both this music (which has been liberated) and for us listeners (who have been in the dark).

Where Gomma's collections were renowned for containing groups we could say sound like UK/US groups (or who seem to pillage UK/US music for sounds or thoughts), New Deutsch has a whole other sound which makes it sound crucial and current, or lost and under appreciated; or even re-born 2 or 20 years later in the rhythms and melodies of UK/US bands when a question of who did it first is asked.

Grauzone's Film 2 and Eisbär are both the tops for me on New Deutsch. Film 2 has been compiled on many compilations like Serie Noire: Dark Pop and New Beat and Compost's I Like It Vol. 1 (reviewed here in the gullbuy), so it's nice to have a second song of theirs to hear. And Eisbär is another incredible song by Grauzone, this time with minimal Germanic vocals, sung in a punky shout which doesn't alienate too much. It's when the guitars kick in, that Eisbär shows how incredible and ahead of their time Grauzone were (or how current they were with New York's No Wave bands), with dissonant, but minimal guitarwork which would finally be accepted when groups like Nirvana used the same style.

Der Plan's Commerce Exterieur Mondial Sentimentale reminds me of stuff Chris and Cosey were doing post-Throbbing Gristle. No More's Suicide Commando is one of the few songs in English, which has a simple keyboard based melody and a slapping rhythm and laidback punky vocals which are slightly out of key in that perfect way. I think Ladytron have stolen a lot of what they know from Echo West's Engelstür - even its melody (it's got male German vocals which is the only difference).

Blindgänger's Spiel Ohne Worte sounds like a combination early Jim Jarmusch soundtrack (thanks to some out there sax) and an electronic nightmare, thanks to the percolating rhythm and scratchy echoed guitar.

Fehlfarben's Ein Jahr (Es Geht Voran) is one of my all-time favorite tracks on New Deutsch and it's a dead ringer for Tones on Tail's There's Only One. Amazing to know that Fehlfarben's song came out in 1980 and Tones on Tail didn't exist until 1982. It's also the most catchy dub pop song here, and is wonderful.

DAF's Tanz Mit Mir is a pounding piece of synth pop, with a set of somewhat alienating Germanic vocals. That's the only thing which might turn somebody off from the music on New Deutsch, the fact it's mostly in German, and that language can sound pretty frightening. The other downside is the lack of liner notes, DJ Hell has been doing that lately (his liner notes in I Like It were pathetic). But truly, this cd is a full-on goldmine, each of these groups are worth exploring, and there is much more on this compilation I did not detail here worth exploring.