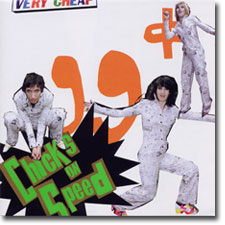 The third COS album '99 cents' is a record I have waited for. Chicks On Speed predated the electroclash scene, and have managed to stay relevant afterwards.

This summer, the last time they passed through the Boston area, they played many of the songs on this record, but the songs were visibly held together by very loose threads.

Now the finished full length is here, and I like many of the songs, though not the most immediate ones, or the ones with guest appearances. I enjoy the oddball songs like 99 cents, Sell-out and Lovelife.