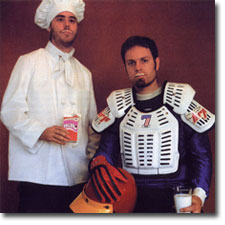 A follow-up to DJ Shadow and Cut Chemist's groundbreaking Brainfreeze (the sampler of source material, Brainfreeze Breaks was reviewed here), Product Placement keeps the heavy duty seven inch soul slices, off the cuff mixing, and scratching alive and well. Like Brainfreeze, Product Placement is two extended tracks of approximately 30 minutes, and emulate the live DJ tour that inspired both sets. Originally Brainfreeze and Product Placement were sold in very limited quantities, but since have been heavily bootlegged, so if you see these cds, chances are you are looking at the bootlegs and not the real thing.

Of the two tracks here, my favorite is the second track. The first track has a couple of fine moments though including the best moment here. At around the 11 and a half minute mark we are treated to the funk workout Rappin' With Gas by the National Fuel Gas Distribution Corporation - a children's rap public service announcement laid on top of a hip hop rhythm which sounds fun and fresh. The mix gets really consistently good from the 18 minute mark to the end of the track (a good 10 solid minutes) with highlights being Esther Williams - Last Night Changed It All, James Brown - Funky President, Miami - Chicken Yellow, Johnny Cameron & The Camerons - Funky John, Willie John Ellison - You Got To Have Rhythm, Harvey & The Phenomenals - Soul And Sunshine, Mongo Santamaria - Coylude, Communicators & Black Experience Band - The Road and Denis Bryant - Soul Man. This is a really hot funky section of the disc which sounds like one of those blaxploitation soundtracks from the early 1970s. Tons of great breaks and rhythms.

The second track seems to stay true to the vision of the original Brainfreeze lost soul 45s vibe from the get-go thanks to some hot lost funky soul like Earnest Jackson's Funky Black Man, Little Buck's Little Boy Blue, Dandelion Wine's Hot Dog, and the Nu-Sound Express' One More Time You All. All of these mix together seamlessly and ultimately make this mix sound a little more concise than track one. I also liked the doubling up of tracks - like the two versions of California Soul by the Gerald Wilson Orchestra and The Messengers; and the Coke commercial jingle section with versions of It's The Real Thing by The New Seekers and the Ivor Raymonde Orchestra. Which leads me to the fact that coinciding with the title of this collection, there are a number of jingles and kitschy commercials strewn through this mix. Nothing as fun as Do the Slurp from Brainfreeze, but you definitely will be getting thirsty when you the sound of soda being poured throughout this mix. Another great section of track two is Motorcross Pt. 2 by Logic Circuit mixed with the Hell's Belles movie ad - get them motorbike engines revving - on the stereo.