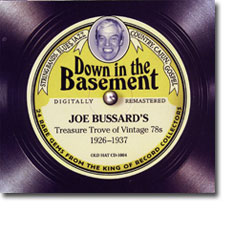 Thank god for the collectors in this world, and in particular thanks to Joe Bussard, a collector who for more than 50 years has been keeping a collection of 78 records in his basement in his Maryland home. Over the years Joe has collected 25,000 78 RPM records, and Old Hat has collected 24 of them on Down in the Basement: Joe Bussard's Treasure Trove of Vintage 78s 1926-1937. Everything from jazz, blues, cajun music, gospel and bluegrass music is included here, in incredibly crisp sound. Old Hat must be commended for this collection and of course Joe Bussard for the hard work and many, many years he's spent hunting for these rare and obscure 78s. There are obscure artists like Gitfiddle Jim and The Corley Family and more known artists like Big Bill Bronzy and Gene Autry all showcased equally here. To add to the wonders of the music in these digital grooves, Old Hat has also included a 70 page book with stories for each artist along with Joe's own recollections, so it truly is like a trip down into his basement, just as it is a trip back in time, when you pop on this compilation cd.

The Stripling Brothers start out the compilation with the hyper, wonderful instrumental theme song called The Lost Child that was the theme song for one of Joe's own radio shows (Joe, in fact still does numerous radio shows, spotlighting all sorts of music like music found on this compilation). Big Bill Bronzy gives us the metaphorically sexual blues song How You Want It Done? with it's charged finger picked guitar lines. The (New) Call Of The Freaks by Luis Russell & His Orchestra is a great jazz tune with it's rousing clarinet, mesmerizing piano and elegant vibraphone, all creating a swirling theme song.

You Got To Go Down from 1935 has a really raw preaching styled vocal by Blind Gary Davis - whom was later re-discovered in the 1960s to great acclaim. The Old Ark's A'Moving has A.A. Gray and Seven-Foot Dilly (aka John Dilleshaw) - John sounds like Johnny Cash here - and I wouldn't be surprised if Cash later covered this song. Ahaz Augustus Gray was better known for his fiddle playing, but instead is singing backup vocals here to great effect.

Easy Rider Blues by Soileau and Robin is a really sweet cajun blues holler in an equally mesmerizing and haunting style. Hastings Street has Blind Arthur Blake on guitar and Charlie Spand on piano in an impromptu and rollicking guitar/piano duet blues. The Corley Family have a ragged but sweet down home family gospel vocal sound with a lot of charm on Give The World A Smile. The Original Stack O'Lee Blues by Long Cleve Reed and Little Harvey Hull (aka the Down Home Boys) is not only really rare - it in fact is a one of a kind record being the only copy known in existence! - it is also a mellow finger picking blues which would make Dylan melt.