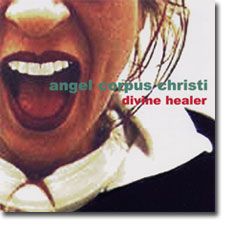 Andrea Ross is a woman from San Francisco who sings and plays accordion and harmonica. With her husband Rich Stim (vocalist of MX-80) and guests, she has been recording as Angel Corpus Christi since 1984. And you know what - all of her recordings (that I have heard at least) are so freaking great that she should be famous. That is why I am so glad that Gulcher put out this CD, and has plans to release more Angel Corpus Christi in the near future.

'Divine Healer' is a brand new studio LP - her first since the 'White Courtesy Phone' came out on Herb Alpert's Almo records in 1995. Someone please re-release that one on CD!

You may have heard Angel Corpus Christi and not even realized it. She ended up in many peoples CD collections through her guest appearance on the Spiritualized track Broken Heart from the 'Ladies and Gentlemen We Are Floating in Space' record.

Angel Corpus Christi sings with a country twang, though her tales remind me of city life. She has the gift of making people who hear her songs believe they know her. I would love to see the band play. I'll bet they are great live, and nice to talk to in person as well.