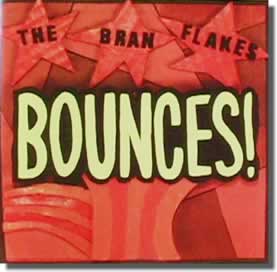 The Bran Flakes are Otis Fodder and Mildred Pitt, from Seattle WA. They use samples from old records to put together collages which work as unified pieces independent of their sources.Bounces! Is their second album, the follow-up to I Don't Have a Friend (see the August 14 2001 gullbuy).

I really liked that record, and I love this one too. There was no disappointment at all - and I had high expectations - the type which are rarely met when the desired object is finally in your hands.

I have listened to this CD very many times during the last 2 months. There are so many moments I love on this CD that I can't really tell it all. I strongly advise you to seek out this CD using the links above.

If I wanted to convert someone to this CD in one song I would play Good Times A Goo Goo, The Bran Flakes appropriation of a Kermit the Frog Sesame Street song. Good Times A Goo Goo takes the Kermit song intact and just ups the ante a bit by repeating parts. The song has that 1-2, 1-2 beat that the best children songs use. It is a great march for happy times.

My favorite songs are No More Free Will, a song with so many distinct parts it seems like several songs. I don't know what the voice which says the title is sampled from, but it makes me think of the 70s cult film Zardoz (I think it is the hunter horn that reminds me). I love the polka samples in No More Free Will song too.

Cool Fresh Apple Cider is the best whistling song - even better than Arling & Cameron's 'Ein Abend in Wein' from their 1998 'All In' CD.

Bounces is very similar (but even better than) the Ursula 1000 song 'Funky Bikini' from his 1999 CD 'The Now Sound Of...' Both songs combine an aerobics instructor leading a class, with a dance beat turning it all into a 'Simon Says' game.

Example 16a is a collage of an instructor from a language tape introducing 16 phrase examples, minus the phrases. The effect is awesome. Example 16a works best when played together with the following song, Intermission Breakdown. Intermission Breakdown is TV dinner music - roller rink styled upbeat motivational stuff like you might have expected Combustible Edison to cover in their day.

Mountain Pasture Party has fiddle, hallelujahs,and many other samples including cartoon puddy cats. It is pure winner.

Pure Love uses great lounge samples like I Monster used on their Daydream In Blue single, or like you might expect to hear on an Elektrotwist song.

The CD ends with Bottom, which is a steady stream collage of celebrities and organizations introducing themselves. It is an incredible end to a truly awesome record. Anyone listening to Bottoms is bound to hear someone which seems to have been added to the list just for them.

I have detailed 9 songs out of 31. There are only 2 songs I'm not crazy for. The first is Ding Dong Dub. I guess I have to say that it is Dorota that won't let me play the track, as the lyric is about drowning a cat. I played the song on the radio and my friend Charles called and said his daughter asked him why anyone would want to hurt a cat. The other track is Mr. Snuggles. It is the only original 'song' on the CD. It sounds more like something the Seattle label Slabco would have put out than something The Bran Flakes would do. Like Ding Dong Dub, there is nothing inherently wrong with Mr. Snuggles, it is just my least favorite track.

These are small trifles for an independent CD as original and enjoyable as Bounces. Pick this one up!