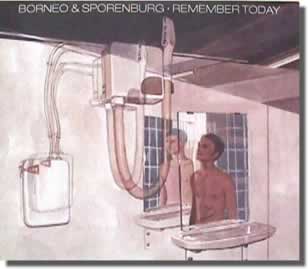 Borneo & Sporenburg are Daniel Varga and Frank Wossner from Cologne Germany. They have a sparkling clean electronic pop sound that is not easily pigeonholed into any existing genres, though many would call it tech-house.

I think that the sound is much more rooted in a rock styled verse-chorus-verse structure than music I would call tech-house, plus the vibe is more relaxed and introspective. It is music for urban loners living in a dance culture.

I really like this CD a lot. I first learned of Borneo & Sporenburg from the WMF Records compilation Audio Video Disco. I first heard of Italic Records, the label this CD is on, from the second A Rocket In Dub 12inch. I would compare Borneo & Sporenburg's sound to Closer Musik or Nikakoi.

This is Music Added to my Day, the song I first fell in love with on the Audio Video Disco comp is here, as is Wiedersehen, Borneo & Sporenburg's 12inch for Italic. In addition, there are 4 crystalline instrumentals, Somewhere in Metropolis with Phillipe Frowein singing (he also sings This is Music Added to my Day and Wiedersehen), and What's Going on Tonight, a song sung by Sara X. Phillipe Frowein also plays guitar on Wiedersehen and Somewhere in Metropolis. His voice reminds me of Mick Jones (The Clash) or even Tarwater.

I listen to a lot of music for the gullbuy, and many artists have stuff that sounds a lot like other artists. Borneo & Sporenburg seem to be forging their own path, and the sound they have come up with on Remember Today is thoroughly modern and engaging.