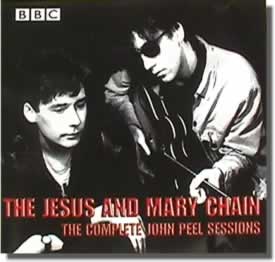 Collecting the series of six Peel Sessions the Jesus & Mary Chain recorded between 1984 to 1989, this cd is a prime slice of what made the Chain so great in their heyday while also opening up a side of the band seldom seen.

This was a time period when I was hugely into the J&MC and I probably would've given my left arm or first born to hear these recordings back then, having to settle for the more fuzzy and not as well recorded bootleg concert tape I bought which was recorded at this same time.

What these recordings hold is fascinating for anyone who was a big fan of the J&MC first album Psychocandy (1985), because the first 11 tracks are basically live versions of songs from that album (and the first 4 tracks were actually recorded prior to the band releasing their first single).

Psychocandy had brilliant production (homages to The Velvet Underground, The Stooges and Phil Spector all bathed in a wall of feedback and guitars) and what the Peel Sessions do is give us a chance to hear most of this album in a more rocking less produced mode, the end results bring forth aspects that were perhaps hidden in the original album's production.

What we get is the more rocking side of Psychocandy, a heavier bass, more upfront and powerful drum and every so often a chance to hear the vocals more coherently. So while we might lose some of the magic that was Psychocandy's production, we gain in rocking attitude.

Of course this is not all: on one of these Psychocandy era sessions, the Chain did a 360, recording tracks 8 through 11 acoustically, perhaps so they wouldn't get pigeon-holed as noise-makers, and also to give us a hint of what their second album would sound like - Tracks 12 and 13 are different versions from Darklands and track 14 is a different version of the b-side on Happy When It Rains Single from 87 (which also was on Barbed Wire Kisses a singles and b- sides compilation).

Sidewalking (track 15), is a more bass heavy version than the single from 88 (also on Barbed Wire Kisses) and Far Gone & Out (track 19) was recorded in 89 but wouldn't be released until 92.

Finally, rounding out the Peel Sessions are alternate versions of Silverblade (originally on the Rollercoaster single from 90), 3 songs from Automatic (Tracks 16,17,21) and a cover of the Temptations My Girl (Track 18) which is the only real side-step on a virtually perfect collection.