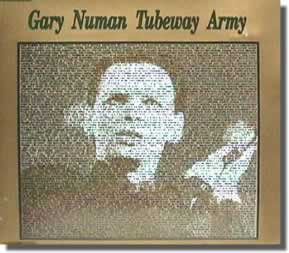 Collecting the two John Peel Sessions recorded by Gary Numan as Tubeway Army - both recorded in 1979 and produced by Tony Wilson.

This was prime era Gary Numan - he had perfected the Gary Numan beat - and would soon have a huge hit with Cars (included here in a more stripped down version). What we get here is basically a live Gary Numan album without any crowd noises - essentially a recorded document of his best stuff.

Also included is what was to followup Cars and perhaps had hopes of being just as huge, Conversation (track 4): this is the real find for me here (thanks to Carl to pointing me to it) it also gets an extended treatment at almost 7 minutes. Other great tracks (there are no bad ones) are Airlane, Films, Me! I Disconnect from You, Down in the Park and I Nearly Married a Human.