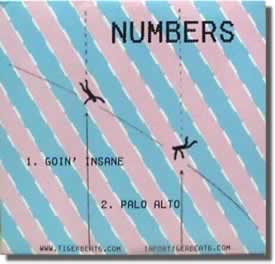 Generally, when Carl doles out music to us reviewers, he tries to match the CD with the person -- e.g. punk rock CDs do not go to folks who hate punk, etc. Every once in a while, however, compromises must be made and this, my friends, is one of those times.

Two songs each by two different bands on a three inch compact disc. Of these two bands, I had never heard of Numbers (though two of their three members were in Xerobot, whom I had heard of) and while I had been hearing the name Erase Errata for quite a while now, I had not been exposed to their music. Artsy stuff, though, I assumed -- correctly, too.

Numbers is all guys, Erase Errata all women. Erase Errata has more members and thus a more fleshed out sound. Sometimes it sounds like Booji Boy is singing for Numbers. Carl tells me that both bands remind him of the Scissor Girls and I am in no position to contradict him. I also read a review comparing Erase Errata to the Scissor Girls for whatever that's worth. One Numbers song (Goin' Insane) is kinda Jazz through a Devo filter. Erase Errata is generally more skitterish and angular (even on their more straightforward number the guitar is spazzing all over the place. Numbers is more electronic than Erase Errata but they do have a live drummer. Erase Errata has screamy girl vocals -- post-riot grrrl?

Most favorite song? Palo Alto by Numbers. Palo Alto is in California and has a neat old movie theater with an organ that rises out of the floor between films while someone plays old-timey songs on it. Gullbuy writer Teresa (and the Donnas) are also from Palo Alto.

This review of a neo-No Wave CD is over.