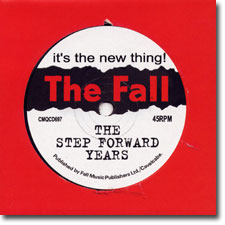 Listening to The Fall's It's The New Thing! The Step Forward Years is like listening to The Fall for the very first time. That's because this cd collection compiles the very first recordings The Fall made and released between 1978 to 1980 on the Step Forward label. Like any Fall collection, it's not comprehensive, but unlike previous (much older) ones, it actually sounds pretty good. It's not mastered from a vinyl source, like a lot of the ones from the 1980s. It also contains some albums that haven't been on the market in a long time.

The Fall released 4 singles and 2 albums on Step Forward and this cd collection collects 20 songs from them in all. The Fall started out strong and were quite different for the times. Rather than 2 minute fast punk songs or pub rockers, as was the style in the UK thanks to The Sex Pistols and The Ramones, The Fall did repetitious rants all based around simple cacophonous riffs and Mark E Smith's voice. More like krautrock or No Wave then anything else. Combining a lyricism influenced by Albert Camus, and a free flowing, raw under practiced band that included dissonant guitars and cheesey keyboards, The Fall were a wild ride in those heady days of the late 1970s. Step Forward apparently was one of the few labels to touch them, because of their rancor and disinterest in caging their own fury. The label let them explode, scratch, run off and expand, and this cd highlights the best of these moments taken from the Live At The Witch Trials and Dragnet albums. Of course, it doesn't have everything from those albums, so don't throw your lps away just yet.

This collection will definitely please those who checked out The Rough Trade collection - Totally Wired and liked it and were curious about the very early recordings. It's probably worth it to get both the cd collections, especially for The Fall fanatics and especially if you've worn out your lps. You certainly won't be disappointed in this collection. In a lot of ways this is some of the greatest music The Fall ever did. Relentless, dry, humourous, dissident, repetitious, fiery and edgy all describe The Fall in 1978. Even though the second album Dragnet was recorded in purposely poor quality, it sounds a lot better on cd than it did on vinyl. Gathered here are such great tunes as Rowche Rumble, Repetition, Rebellious Jukebox, Music Scene, Before The Moon, Dice Man, Muzorewi's Daughter, and Spectre Vs Rector.

Most of these songs have not been compiled in recent memory and it is definitely time to re-listen to them. I had the Dragnet album on a cassette for many years and barely listened to it. The collection most people had that represented these years was the early 80s collection which centered on the singles. Sure there's some thin sounding drum sounds, and distorted vocals, but surely that was the point. Those guitar scratch and carry on, Mark E. Smith squacks and carries on, and the rhythm section keeps things lumbering along. The Fall really took a lot of chances in these early days, especially on these album tracks, and they are definitely worth checking out. It's an added bonus that these recordings just sound so great, probably the best they have since they were originally released in the late 1970s.