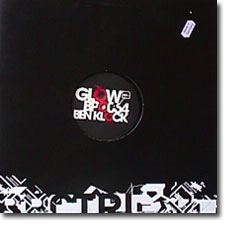 Ben Klock jumped onto the Bpitch Control roster after first appearing on the WMF Record 'Nighteffect' compilation as Ben E. Clock. Glow is his second release for Bpitch Control.

Glow has many elements that I like, and is executed in near perfect fashion. The electronic backbone is dirty and distorted, and the vocals appear throughout the whole track. The beat is as solid as Gary Glitter's Rock and Roll.

"You make me glow" is a positive sounding lyric and the feel of the song is upbeat, but the distortion on the voice and the electronic make the sound more like a circuit glowing white hot with heat than like a person glowing with life or health.

Captain Future has a title that makes me think of the 60s marionette space TV show Captain Scarlet. Ben Klock's Captain Scarlet is an instrumental that crackles with energy just below the surface. It reminds me of the sound of a hot rod engine tucked beneath a sound damped hood - all potential, all power.

I want a Ben Klock full length! He has a lot of different sounds up his sleeve, and a nice track record of delivering the goods on every cut.

Ben Klock in the gullbuy: