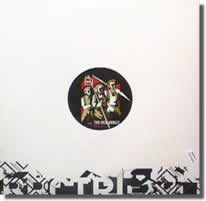 Ben Klock is the same person who recorded as Ben E. Clock on WMF's debut compilation 'Night Effect.' His track was my favorite cut on that record.

Ben is back with this new single. There are two tracks on this Bpitch Control 12inch. Both are electronic stompers with a bit of similarity to T. Raumschmiere.

Tag Der Arbeit (Day of the worker) is my favorite of the 2. It starts off with the deliberate beat almost like a march. It is when the distorted synth comes in that the track grabs you like a million dollar hook in a hair metal song.

On the flip is the track Invasion. Once again the song has a very forceful beat, but the flourish is more tech-house than War of the Worlds.

This 12inch further cements the fact that Bpitch Control and Shitkatapult have been moving towards each other in sound. Both labels have even released singles by the same artist (Kero). I no longer buy a single just because it is on Bpitch control (there are so many!). I listen to every new release. Ben Klock's 12inch was an easy choice to put in my bag. It is a solid single.