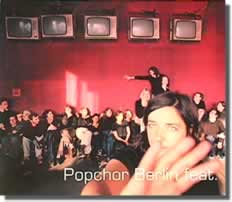 Popchor Berlin is a 25 person choir formed by Flittchen Records co-owner Almut Klotz. His inspiration was the 1967 film The Umbrellas of Cherbourg. The film starred an 18 year old Catherine Deneuve and featured no spoken dialog - every word in the film was sung.

Popchor Berlin has some resemblance to another current chorus band, The Polyphonic Spree. Almut Klotz has gathered a lot of people from other bands for this project. The only name I recognized was Fehmi Baumbach of Jeans Team (and sometimes Stereo Total). Many others make up the chorus, and each are credited on the CD cover.

In this was Popchor Berlin resembles the mid-nineties Boston project Jumbo. Jumbo was a John Philip Sousa marching band made up of a floating cast of Boston musicians taking up brass and woodwind instruments they hadn't played (for the most part) since high school days. Popchor Berlin sound a lot more polished than Jumbo ever did!

Backing music for the tracks comes from Schneider tm, Kissogram, Reverend Ch. D., and Novack. There are two versions of the Devo song Mongoloid, which originally appeared as the B-side of their debut 7inch Jocko Homo. The first version has backing music by Schneider tm, the second is strictly a cappella. Schneider tm does a great job with the music, including what sounds like a sax solo.

Schneider tm had covered The Smiths There Is A Light on a 12inch. Popchor Berlin cover How Soon Is Now, with backing music by Reverend Ch. D. How Soon Is Now is the highlight of this EP. It is offbeat enough to intrigue anyone who recognizes the song.

There is a cover of Die Sterne's Was Hat Dich Blob So Ruiniert. Die Sterne Has been a well know band in Germany for years, but I don't know the original myself. It is the only song sung in German. Backing music for the track is provided by Kissogram.

Missy Elliot is covered with her song 4 My People. It sounds strange to have this very traditional set of chorus voices singing the curses in the song. Novack play the music for the Missy track.

Popchor Berlin is an interesting project, but ultimately not one that I will reach for in my record collection. I think that this CD would have more meaning if you had seen a Popchor Berlin show. The chorus actually has made it overseas and did a show in NYC, but they have never made it up here to Boston.