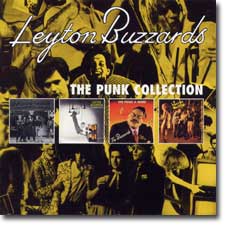 The Leyton Buzzards were one of the many pub rocking bands in the mid 1970s UK scene who turned to punk rock and released a handful of singles and an album. Their music has not been compiled on cd ever, so for many years it was just the vinyl collectors who have been able to hear them. Captain Oi! has stepped up and released this fine 15 song collection spanning the best songs by The Leyton Buzzards.

The Leyton Buzzards combine the best pub influenced rock with a fiery punk sound which can best be described as combining the glam style of Mott The Hoople with the sped up punk of The Toy Dolls. With a few forays into reggae rhythms for fine measure and to round out their sound, it's not surprising that The Leyton Buzzards had some success on the singles charts in the late 1970s. It's also understandable why they ended up somewhere in between the pop charts and the punk clubs, perhaps not ever really fitting in either place, eventually collapsing after signing with a major label.

Time has definitely made The Leyton Buzzards sound all together fresh again. With songs as varied and exciting as 19 & Mad which is their first single and a punk raver and Sharp Young Men which is a Radio 1 session and a mod stomper. Saturday Night Beneath the Plastic Palm Trees and British Justice both have a sound which reminds me of early songs by The Police but with a more angsty lead vocal. There's also The Toy Dolls-like No Dry Ice or Flying Pigs which tells you where they were at when they performed live (they were a rock band and not a spaced out outfit like Pink Floyd!). We Make A Noise and Mixed Marriage are both great topical oi! punk rocker with a real raw energy and more Toy Dolls styled guitar.