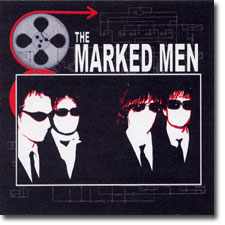 Remember when punk was becoming commercial and passe? (I'm talking late '70s here, not '90s.) The new term being bandied about was New Wave. It didn't have the connotations of boopy robot keyboard pop it does now; even the Undertones were New Wave. Well, bearing that in mind, I call the Marked Men New Wave (but NOT retro!). A little too tuneful and not quite snotty enough to be punk, but still sharp enough to shave with.

This band is only one person shy of sharing the exact same membership as the late, lamented Reds (they also of Rip Off Records fame).

Echoes of the Ramones, Radio Birdman, the aforementioned Undertones, and dozens of other bands I love. I thought the Reds last album was great but the Marked Men blow me away!

Rip Off Records in the gullbuy: