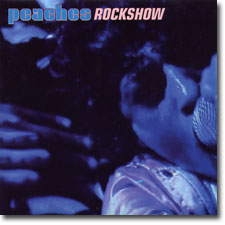 Peaches first release on her new UK label XL Recordings is a song she released three years ago before moving from Canada to Berlin.

Rockshow was part of a self-titled 6 song CDEP on Canadian indie Teenage USA Records. When she moved to Berlin she became part of the label Kitty-Yo, as did her friend and fellow Canadian Gonzales.

Rockshow sounds like a cross between Bratmobile and Joan Jett. There are no electronics or samplers - just Peaches on guitar and vocals, and Steve Keeping on drums.

Having Electric Six do a cover of the track was a stroke of genius. The song fits so perfectly into their sound that it seems like it was written for them. From the cowbell start to the strutting vocal, Rockshow works well in the hands of this band.

Electric Six have been performing Rockshow in their live sets recently, so you may already know this song even if you are not a Peaches fan.

Supposedly this is a very limited release, so I'd say you may want to pick this up the first time you see it.