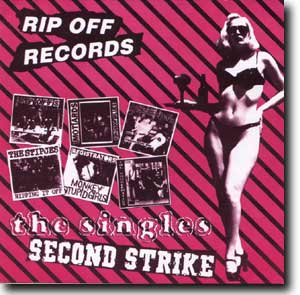 Noisy, trashy punk straight outta the garage -- ahhhhhhh! If that's what you want, that's what you'll get from Rip Off Records. Here's a second collection of their singles, all originally released 1995-96 and all currently out of print. We're talking cream of the Rip Off crop here: Loli and the Chones, Registrators, Motards, Problematics, Stipjes, and of course, The Rip Offs.

Holland's Stipjes win the song-length contest -- both of their songs are over two and a half minutes long, while most of the other cuts on the album self-destruct before the two minute mark (some barely make it past ONE minute).

My favorite tracks (in no particular order): Bad Habit (Problematics), Monkey and Stupid Girls (Registrators -- YEAH!), Straightjacket Baby (Loli and the Chones), Yo Love Mexico and Crazy (Motards), and Go Away (The Rip Offs). I'd spend more time describing the music but what can I say? It's lo-fi garage punk trash. Really GOOD lo-fi garage punk trash.

Who knows? What with noisy rock back in vogue (due to bands like the Hives and White Stripes) maybe we'll be seeing some of these bands (well, the ones that haven't broken up yet) on MTV in the near future. Yeah, right! (Though I did say that about the White Stripes a year ago and look at 'em now.)

Rip Off Records in the gullbuy: