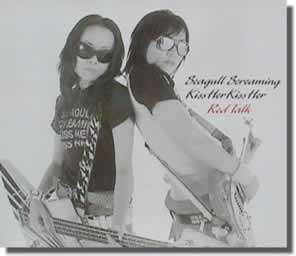 Compiling eighteen tracks from the years 1996-2001, Red Talk is SSKHKH's first full-length release outside of their native Japan.

Having only ever heard one single by this band about four or five years ago, I wasn't quite sure what to expect but this record wasn't what I had expected at all. More alt-rock than anything else, but not in an obviously calculated way. This band was not afraid to take risks, straying from their usual rock band idiom and succeeding (c.f. Sister Sister, all cutesy melody on boopy-beepy keyboards over a funky drummer-style break with layered, breathy vocals and If I Happen to Fall Down (In Your Arms), a pretty ballad with just acoustic and steel guitars).

The first time I listened to this CD, it took half the album to realize who lead singer Aiha Higurashi reminded me of (and it was driving me CRAZY cuz I just couldn't put my finger on it): Justine Frischmann of Elastica (other times she channels Debbie Harry, I also hear some influence from PJ Harvey).

Fave tracks : the ones I already mentioned plus A Guitar for Me and Milk for Her, singer/songwriter Aiha's boppy celebration of her becoming a mother (complete with guitar feedback/baby gurgling intro), Sentimental Journey, Pretty in Pink (not the Psych Furs' song), Grapefruit (like Luscious Jackson and early Cibo Matto in a blender), Asking for It, Chik Chik A.A. where they show the influence of Buffalo Daughter and Cornelius, As Long As We're Together (laid back verses w/hip hop beats into Rock Out choruses - nice!).

Usually I don't like to listen to the albums I review over and over before writing about them; I prefer to go with my initial impressions. I have to admit, however, that I wish I had had more time to fully absorb Red Talk.