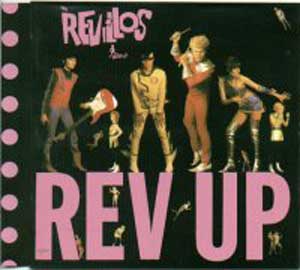 Following the demise of the Rezillos (see the gullbuy review of their CD [read review]) at the close of 1978, lead singers Faye Fife and Eugene Reynolds stuck together and formed the Revillos. The Revillos pretty much continued along the path the Rezillos were already headed down but with perhaps even more emphasis on their '60s pop roots and allegiance to demented genius producers Joe Meek and Phil Spector. This CD includes the band's 1979 debut single, their 1980 debut album, as well as miscellaneous single tracks from that same year (excellent value!).

The CD opens with the instrumental 'Secret of the Shadow' a twangy number that brings to mind the B-52's (calling them the Revillos' American counterparts wouldn't be so far off the mark). The next song, 'Rev Up,' will be instantly recognizable to any fan of the celluloid masterpiece Sixteen Candles -- they play it at the school dance (along with the Specials' 'One Two' -- were they playing that stuff at *my* high school dances? Wait don't tell me, I'll feel like I *did* miss something!). There's also 'Yeah Yeah,' a song I'm familiar with but never realized it was actually *written* by the Revillos; I had always thought it a cover from the '60s. Speaking of '60s covers, there are versions of Johnny Kidd's 'Hungry for Love,' The Capitols' 'Cool Jerk' and Swingin' Blue Jeans' 'Hippy Hippy Shake.' Some of my other fave cuts are 'Scuba Scuba' (a non-LP single), the Meek-esque 'Bobby Come Back to Me,' 'Motorbike Beat,' and the b-side track 'The Fiend,' punker than most anything else the Revillos or Rezillos could muster.

Having been disappointed by the Rezillos lackluster performance on their recent reunion tour, this CD was just the thing to get the bad taste out of my mouth.