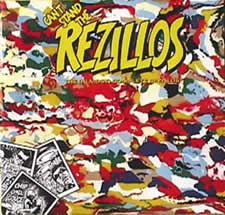 Scottish Punk/New Wave band, formed c.1976. A debut single ('I Can't Stand My Baby' b/w 'I Wanna Be Your Man') -- lamentably left off this CD -- was released in 1977, resulting in the band being picked up by Sire Records.

In early 1978 Sire flew the band to New York to record this, their debut album, with producer Tony Bongiovi (yes, Jon Bon Jovi's uncle). By the end of that year the band was breaking up and delivered a farewell show at the Glasgow Apollo two days before Christmas.

In the Spring of 1979 Sire released an album of that final show, called Mission Accomplished... But the Beat Goes On. That album (minus the song 'Destination Venus') and both sides of the 'Destination Venus' 7inch have been appended to the debut album to round out a truly worthwhile CD. Even if you have the LP the live tracks are rather good for live recordings. But I've written so much and haven't really mentioned the music.

Chainsaw guitar, sometimes female vocals, sometimes male, sometimes both. Most of the record is a bit too poppy to wholeheartedly endorse as punk, but rolicking and rocking all the same with no surfeit of energy.

Highlights include their classic tunes '(My Baby Does) Good Sculptures' and 'Somebody's Gonna Get Their Head Kicked in Tonight' (originally by Earl Vince & the Valiants aka Fleetwood Mac) plus 'Top of the Pops, ' 'Flying Saucer Attack,' '2000 AD,' the Dave Clark Five's 'Glad All Over'... and those are just from the debut album.

There's also 'Destination Venus,' later covered by Man or Astro-Man? and released (if memory serves me correctly) as their first track with vocals, and live versions of 'Thunderbirds Are Go,' Sweet's 'Ballroom Blitz' and 'Teenbeat' (is that where Mark Robinson got the name for his record label?).

Oh, I should also mention Rezillos singers Faye Fife and Eugene Reynolds soldiered on under the Revillos monniker while guitarist Jo Callis went on to eventually join Human League and pen the music for 'Don't You Want Me' (among other songs).