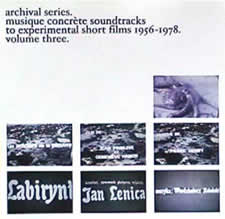 The first is the soundtrack to Les Amours de la Pleuvre, directed by Jean Painlevé in 1964. French surrealist filmmaker Jean Painlevé was known for his underwater short films which are quite distant from the slick nature documentaries we are accustomed. Approaching his subjects with wit and a joyful inquiring mind, he spent his life in an unequivocal pursuit of recording the commonplace behavior of minutely small creatures, his films set to soundtracks by Duke Ellington, Louis Armstrong, Darius Milhaud and in this case by Pierre Henry.

Jean Painlevé's marvelous documentaries are amongst the hidden treasures of French cinema. The soundtrack is done by the celebrated French composer Pierre Henry who was among the vital forces behind the evolution of musique concrète, being the first formally educated composer to fix his mind on to the electronic medium.

Henry, having little regard for traditional musical instruments, preferring instead to privately experiment with non-musical sound sources, over time, he grew fascinated with the notion of incorporating noise into the compositional process.

Beginning in 1952, in all, he scored more than 30 films and stage productions including this soundtrack for Jean Painlevé's Les Amours de la Pleuvre (1964).

The second track is the soundtrack to Labyrinthe (1962) - directed by Jan Lenica, renowned Polish animator, graphic artist and set designer who passed away in Berlin on 5 October 2001, aged 73.

Jan Lenica is probably best known in for his poster artwork for Roman Polanski's films Repulsion (1965) and Cul-de-Sac (1966). Both are childlike and abstract, though immediately distinctive.

Like Polanski films, Lenica's career in poster art and set-design cultivated associations with the absurd, a preoccupation that culminated with a series of remarkable animations during the 1960s and 70s.

In 1962, Lenica created Labyrinthe (1963) a self-consciously Kafka-esque tale of a winged lonely man literally devoured by totalitarian rule. Along with Jirí Trnka's Ruka (The Hand, 1965), Labyrinthe is considered to be one of the finest political animations ever made.

The soundtrack was done by Wlodzimierz Kotonski, a pioneer of electro-acoustic music in Poland with experimental works such as Study for One Cymbal Stroke (1959) and Microstructures - Concrete Music (1963). He represents the productive search for contemporaneous expression and the desire to incorporate new scientific and technical thinking into his music. Since 1967, he has concentrated on teaching composition, rearing young talents such as Hanna Kulenty and Pawel Mykietyn.

The New England Electric Music Company has taken it upon themselves to release these fine musique concrete soundtracks in a very limited edition - perhaps as few as 100 or so of each - in hopes of flying under the radar so to speak.

Luckily Carl has gotten his hands on Volume Three - and one hopes we will obtain other cds in this series as they will not only be rare (almost one of a kind) but make a quite fascinating edition to any library. At 22 minutes the cd is easy to listen to while making you want more. One is amazed at the originality of these soundtracks and also makes one wish they could somehow see these films (if you haven't already).

The New England Electric Music Company is named after the Thaddeus Cahill's Holyoke, MA based company which manufactured one of world's most infamous musical instruments the telharmonium.

On to the soundtracks themselves: each is around 10 minutes long. The Pierre Henry piece has a male voice giving a French narrative coupled with Stereolab-ish blips and bleeps.

The Wlodzimierz Kotonski piece actually sounds even more aquatic than the Henry piece, ironically, submerging us in gurgling underwater-like sounds. The two pieces actually segue into each other so they could be played together or separately.

this review was written with material sourced from the following sites: