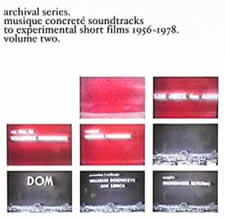 Subtitled 'Musique Concrete Soundtracks to Experimental Short Films 1956-1978.' Artists are Bernard Parmegianiand Wlodzimierz Kotonski. Volume Two of the archival series of 3' cds, put out by the New England Electric Music Company, is the most coherent of the three Archive series that I have heard so far.

There are 2 long tracks which mix seamlessly.

Volume two is definitely up there with the other two volumes we've heard so far in this series. Some day I hope to see these films.

I think track one is amongst my all time faves in this series; I mean anything with organ, singing and pigs squealing and you really can't go wrong.