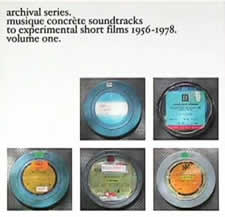 Subtitled 'Musique Concrete Soundtracks to Experimental Short Films 1956-1978.' Artists on the CD are Tom Dissevelt, Gershon Kingsley, Percy Grainger, Pierre Boulez, Joan LaBarbara. Volume One of the archival series of three 3inch CDs put out by the New England Electric Music Company, is by far the most varied of the three Archive series that I have heard so far. There are 4 much shorter tracks - but also there is the most tension conveyed.

All in all, I think Volume one of this series is my favorite, thanks to the variety and the number of tracks included. These would sound great on any NCP show, or even inbetween songs on your rock show if you want something a little more interesting to segue between rock tracks.